Rock and Roll! Over the years there have been many games that play into popular music of their time. Retro gaming is no exception to this, especially during the times when rock and roll was at its zenith (the 90s!). This week we explored some games they were based around one thing: rockin’ hard. Whether it be the likeness of your favorite band or their music re-envisioned via a video game synthesizer, rock and roll video games have been a sadly unexplored region of the retro game market.

Having been a youngster in this era I was enthusiastically devouring all things X-Treme – Surge Cola am I right?! During the action movie renaissance I played game after game based on titles such as Cliffhanger and Last Action Hero, but it wasn’t until my early teen years that I was taken in by the power of the flying V guitar. Luckily the video game industry matched my fervor with their output of titles featuring alternative music themes. While they may not be great quality, they are definitely worth checking out for some fun head banging and button mashing. Without further ado, let us explore some rock and roll retro. 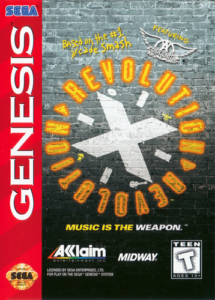 Aerosmith was at the height of their polarity in the 90s, so why not make an arcade rail shooter where you save the band from the clutches of a fictional evil organization? Developed by Midway in 1994, the gameplay for Revolution X is nearly identical to the Terminator 2: Judgment Day arcade cabinet. In a future version of 1996, the New Order Nation has abducted the band as part of their war on youth culture (video games, rock music, beanie babies, etc.). In order to save Steven Tyler and friends you must first fight through various locations around the world and defeat the forces of evil. All members must be found in order to see the good ending, in which the players go backstage after blowing up Helga, and can collect high-value Mammy Awards, as well as party with the band. 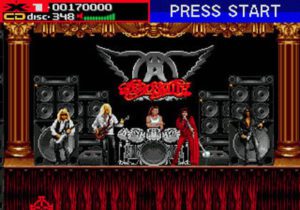 Revolution X was later ported to multiple home consoles including the Super Nintendo, Sega Mega Drive, Playstation, and Sega Saturn. The soundtrack consists of several Aerosmith songs continuously looped, including “Eat the Rich,” “Sweet Emotion,” and “Walk This Way.” The console versions also included watered down versions of “Rag Doll,” “Fever”, and the classic “Dude (Looks Like a Lady).” 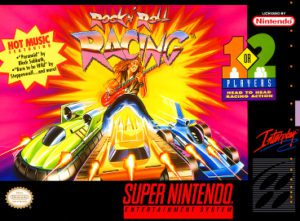 Developed by Silicon & Synapse (now known as Blizzard Entertainment), Rock n’ Roll Racing is one of the most overlooked racers for the 16-bit console generation. The game features a number of popular rock and roll (and heavy metal) songs, including great instrumental renditions of Black Sabbath’s “Paranoid,” “Highway Star” by Deep Purple, and “Bad to the Bone” by George Thorogood and the Destroyers. 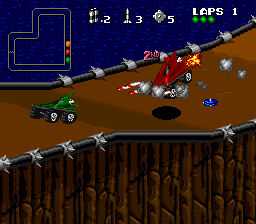 The racing itself is the top down, Off-Road variety with heavy emphasis on attacking competitor’s vehicles. Tracks are littered with mines and health power-ups, as well as money power-ups to change up the pace of the race. Other hazards include oil slicks, snow drifts, and lava, depending on the planet hosting the race. Clearly the main draw here is the multiplayer racing and the awesome soundtrack which is well worth the price of admission. 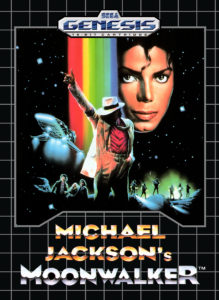 Michael Jackson’s Moonwalker is crazy. In retrospect this game should not exist, however it’s hard to imagine the King of Pop not having his own game in the 90s. Based on the 1988 film of the same name, Moonwalker was released on a variety of platforms with the Sega Master System and Mega Drive being the most popular. The story loosely follows the film in which Michael Jackson, wearing the awesome suit from “Smooth Criminal,” must rescue kidnapped children from the evil Mr. Big (Joe Pesci). Yes, you read that right… The gameplay is focused on finding children that have been kidnapped by Joe Pesci.

Jackson attacks with is his patented high kick and moonwalk dance moves however certain stages show the hero transforming into the cyborg from the film. The home console versions play similar to the Shinobi series with a side scrolling action look.  Most of the songs are from the film yet the highlights come from the Thriller album. Much like Rock n Roll Racing, hearing classic songs like “Beat It” and “Bad” through the video game sound system is just plain fun. I revisited both the Moonwalker game and the film in my research and I can say that they both hold up due to the sheer insanity. Did I mention that Bubbles, Michael’s pet Chimpanzee, is also featured? 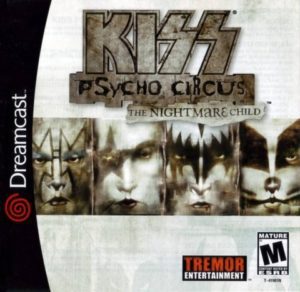 This first person shooter for the Dreamcast and PC is a prime example of getting a licensed rock and roll game wrong. You don’t get to play as KISS! Seriously!! Rather than playing as the famous band, the game instead has the player taking control of a KISS tribute band that suddenly get super powers. The game is based on Todd McFarlane comic series of the same name uses the McFarlane art style with mixed results. 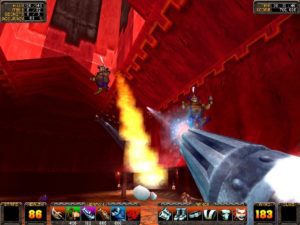 In an attempt to recreate the popularity of Doom and Quake, developer Third Law Interactive released a series of poorly designed first person shooters that featured bland graphics and gameplay. Kiss: Psycho Circus is an attempt to use an existing license to wrangle in gamers however the developer not only missed the mark with using the band’s likeness they also made another fatal error – they didn’t include original KISS songs!!! Instead they rode the techno wave of the year 2000 and used techno versions of classic KISS songs. 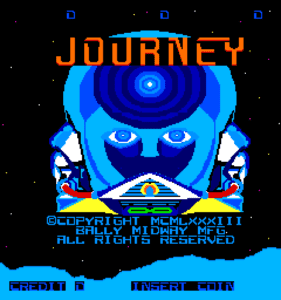 Journey is one of my favorite bands and this is one of my favorite arcade games – there, I said it. In 1983, arcade giant Bally Midway released Journey on the unsuspecting masses. The game is a collection of mini-games that sees each band member trying to recover their instruments and fight aliens (I think they’re aliens). After all five instruments are collected, the player then becomes a roadie for the titular band as they rock out to “Separate Ways.” Fun fact: the song was literally on a cassette within the cabinet. 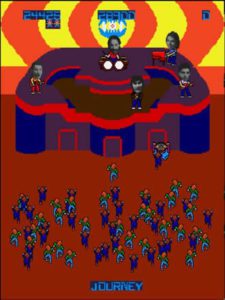 Besides the amazing music that scores each level, another great aspect of Journey was the photorealistic graphics for each band member. There’s really nothing quite like seeing a black and white photo of Steve Perry’s head pasted on a weird animated body fighting aliens with a microphone. The cabinet was originally going to take pictures of high score holders but some hilarious ragamuffins decided to flip the cabinet the bird so the developer removed the feature.

What are you favorite games based on rock and roll? Where should the genre go from here, Limp Bizkit perhaps? Comment below and stay tuned to GWW for more retro game features. 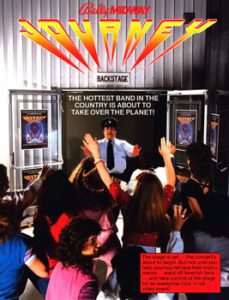