Rolling the Dice in a Frozen Adventure, a “Dungeons and Dragons: Frost Giants Fury #1” (Review)

Any battle you can walk away from is heroic! This new arc in the Dungeons & Dragons series picks right up where the previous story ended. But as this issue states, you don’t need to be familiar with the previous adventures of our traveling party of heroes. There is even a recap and character bio in the first few pages to give new readers a recap. TL:DR tells you that the group failed to kill a vampire lord (Strahd) and escaped with grievous injuries; physically and emotionally.

I have been anxiously anticipating this first issue for Frost Giants Fury since Shadows of the Vampire ended. I am in love with Jim Zub’s writing style as he brings to comic book life the campaigns and adventures you would find around a tabletop full of dice, supported of course by the WOTC (Wizards of the Coast) campaigns. Yes, this series is most likely set to follow the events, locations and evil villains of the Storm King’s Thunder D&D campaign. However, any role-playing gamer will note that those books are just guidelines for any number of adventures that can deviate just from a simple setting. Once again, this issue has a mission statement that clarifies for the reader, that this will not follow the strict serious nature of a high fantasy novel. Fans familiar with Minsc and Boo will know the purple tattooed ranger to be full of wit and lacking wisdom. What really made this issue interesting and unique for me, was that after failing to rid the world of the Vampire Lord Strahd, Minsc feels less of a hero and no longer has his iconic outlook. This shows some layers to a character that is typically portrayed in one tone. I’m excited to see the developments each of the party members make in their personal outlooks. 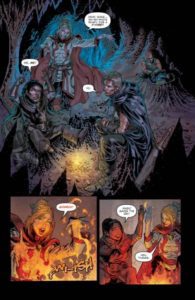 It isn’t just the heroes that are exploring different facets of themselves in this first issue, but the bone chilling environment that Netho Diaz has illustrated for us has brought a new dimension to this D&D comic. With threats to the party manifesting in the forms of ogres and blizzards, I already have a sense for this new story line and how it will challenge the characters in more ways than just a fight. Diaz brings to the table(top) experience colorful heroes that have already shown to be well-equipped and detailed characters, showcasing their heroic abilities in their first encounter. The quick first battle wasn’t confusing with too many moving parts or quick actions, but had a flow and order to it (almost like there was an initiative order the characters and monsters followed in turn).

This first issue was everything to be expected of an introduction to a new story (campaign). You’ll see the wintery world the heroes are thrust into, the state of their mental and physical health through dialog and recap, meet a new ally and finally get a glimpse of the approaching giant evil, literally Evil Giants. I enjoyed this issue as a continuation of the series and as a new adventure separate from the previous issues and want to see what part our heroes will have. Make sure to read all the pages of this book as there is a character sheet for the mighty Minsc!