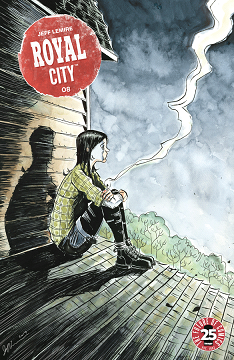 This new issue of Royal City has us exploring a lot more about Tommy and the kind of person he was prior to his passing. I found his connection, or really the lack of a connection he has with his older brother Richie quite relatable and understandable. Even though they are only a year and a half apart. You can quickly grow apart from someone, and there’s nothing wrong with that as long as you show each other support and care. Richie has the personality of being carefree and really lacks any responsibility for his self. Tommy shows himself to be a very caring person even though he enjoys being by himself to write and listen to music.

One of the best parts of this issue was the short 2 pages that covered on how he felt about Ritchie and as it goes along with how he describes everything he’s seeing around him while he is with Ritchie and Ritchie’s friends. You get that sense of feeling that he seems to be a little lost in his life. The way he worries and admits to even maybe overthinking and being a bit paranoid on how he may believe others think of him or how he is reading a situation is exactly how so many teenagers feel especially when you’re experiencing new things in a social environment with people you don’t really know.

You can have a sense of anxiety and on top of Tommy already taking tests from a doctor because he doesn’t know what’s going on with him. Tommy has all the right to just flat out not feel well about anything right now. I’m sure many of us go through that feeling of being lost in life and not sure how to really handle certain situations. When we reach the end of the issue, Tommy decides to go up to his friend Tara. With it ending on some strong words of how Tara shows how much she cares about Tommy and believing that everything will be fine. What I think brings out the real humanizing factor in this moment is when she is asked if she thinks everything will be ok, Tara then replies that she just doesn’t know. Not knowing the future can be the scariest thing, especially in this situation. What’s important though is having someone there and be with you through the bad times and hoping that things will turn out good in the end.

Jeff Lemire continues to bring real-life drama that takes his readers on an emotional journey as we learn more about this family in a small town that is still dealing with their loss. To learn more about Tommy not only makes the loss feel more real but also heartbreaking.

Image Comics Jeff Lemire royal city
Are you an Insider?News, reviews, & updates are just the beginning.