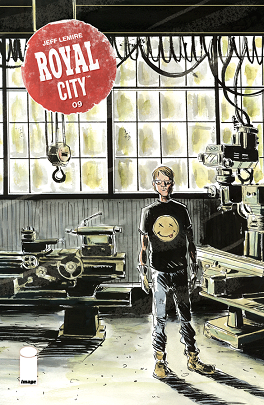 I’m not sure how Jeff Lemire does it, but he continues to bring great storytelling to this family in Royal City. This time we take the focus away from Tommy for the most part as we get some backstory on his brother Pat and how he is viewed. I have to say the most interesting bit about this issue and with previous issues is how Tommy describes his family from his point of view. It’s amazing how someone’s perspective of himself or herself can probably change after being told how they feel and what kind of person they are. Tommy describes how he wants to be out of this town and you can feel the disappointment in his words as he describes his brother. It seems that he believes his brother Pat can go out and make something of himself but lacks the severe motivation and dedication for any type of work. The dead eyes in Pat’s face paint the perfect picture of someone who is just completely unhappy in their life but doesn’t seem to know what they should do to find happiness.

Later on when we see Patti run into her high school lover and now friend Robert. We get this nice calm moment for both of them as they just catch up with each other for a little bit before things get a bit awkward as Robert brings up their past relationship. This exchange takes up about a good quarter of the issue but I found it important for Lemire to display how Patti is handling this situation as she just wants them both to move on from a relationship that happened so long ago. I think when it comes to these kinds of situations; even in real life they’re not the easiest thing to talk about and thus write, but Lemire nails this interaction. Since it’s been so long for either of them this is something that really shouldn’t matter as Patti even brings up valid points on why it really wasn’t going to work in the long run at the time and even then. No one is the same person they were in high school. People change and I believe Robert meant well by his questions, maybe always feeling like he never got a reason but it’s not something that should be killing him inside at this point. I really enjoyed how Patti handled the situation and I’m very much interested to see if these two will run into each other again.

The issue seems to be about moving on and forward in your life giving the situations we see Pat and Patti go through. Even though you may not come out on top in the end, what matters is making the attempt and not dwelling on past decisions.