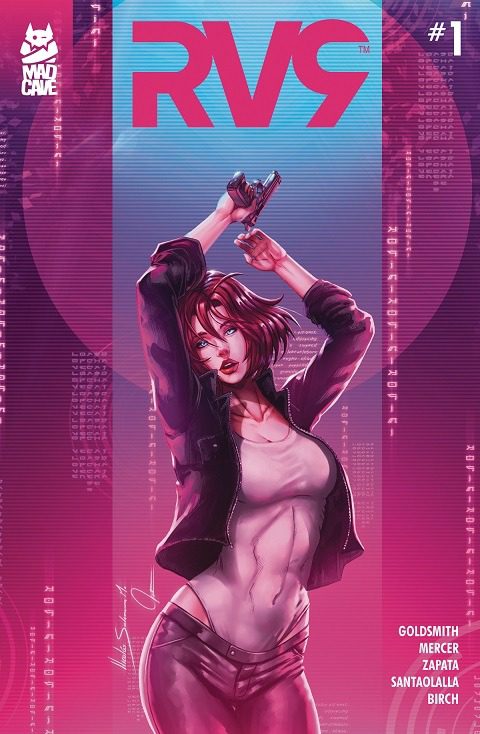 Website Synopsis: Former assassin Velveteen is on the run from the Order of the 9, the organization that took her from her family and forced her into a life where all she knows is secrecy, violence, and death. Now, after years of running, she is bringing the fight to them. With help from an American hacker, Jasper, and a rookie officer with an attitude, Inspector Pazzi, Velveteen will use everything she was taught by the Order of the 9 against them.

Review in Conversation by: Jay & Cynnara

Today for breakfast, I sat down with my best friend and fellow 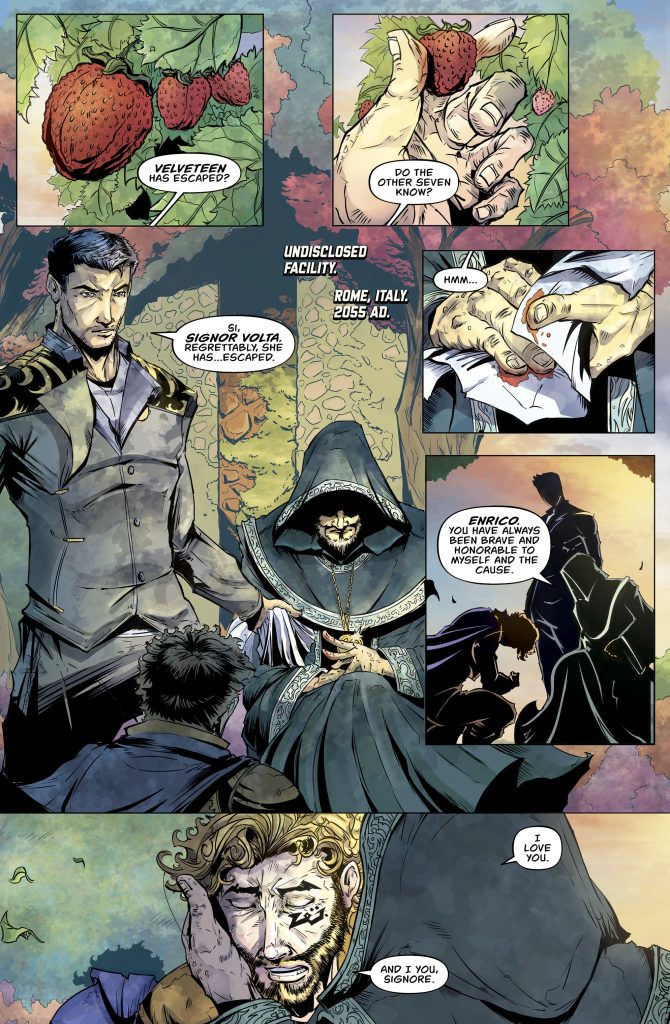 writer, Cynnara. Our topics of conversation included the awfulness of X:Men Dark Phoenix, Stanley from the Office, and Mad Cave Studio’s latest series, RV9. With Mad Cave cranking out consistent hits with Battlecats, Knights of the Golden Sun, Show’s End, and my own comic, Over the Ropes in December, we’d both been looking forward to seeing what kind of time travel shenanigans this newest installment would get into.

Cynnara: So, RV9 from Mad Cave Studios…You have to admit-It’s definitely something unique in the world of assassins, belief systems, and it brings to mind a certain Number One…at least to this Star Trek: The Next Gen fan’s mind.

Jay: Number One? You mean Commander William Riker, the 90’s James T. Kirk? Would you say this book’s found its Riker’s Beard yet?

Cynnara: Well, the first Number One has a nice beard right before he’s no longer Number One, but the next guy, Cain? He’s got some serious goatee action, very sexy. But let’s talk about their master, Signor Volta. He’s a bit of an enigma. More, he seems a bit preoccupied with our girl, Velveteen.

Jay: Whoa, back up. What’s going on with Velveteen in RV9?

Cynnara: Seems Velveteen was part of this illustrious group, then left two years before. However, with being on the run, she’s managed to not just hide, but thrive while keeping ahead of those from Volta’s Revolutionary group.

Jay: What caught me right away wasn’t just the time travel, but the settings. I’m fond of anything taking place in Rome. The art team created future settings which still managed to carry a feel of old-world vintage. The first issue left me asking a lot of questions. Namely, why do you think they named the book RV9?

Cynnara: I think I may have a clue on the name of the book, though perhaps I’m wrong…remember when Volta was remembering his time with Velveteen? He spoke about the Nine books of Knowledge. Plus, he mentioned the coming Revolution. I’m wondering if perhaps that’s the part of the clue- RV for Revolution and 9 for the 9 books. It almost seems too simple though.

Jay: Sorry, did you say something? I was enjoying this slice of my leftover birthday cake.

Cynnara: Don’t make me go back in time and prevent your birth.

Jay: Geez, Cyn! Did you go to the James Rhodey school of time travel?! Before I dust out of the timeline, what else do you have to say about Velveteen? 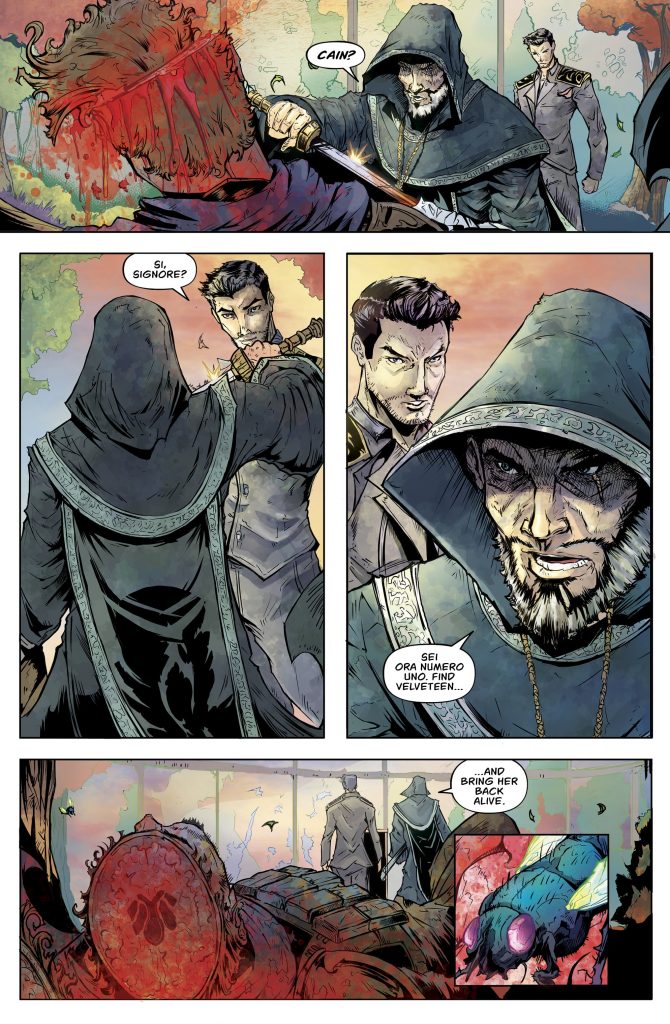 Cynnara: I don’t want to give the game away, but Velveteen- she kicks major ass. I think I could adore her. But her sidekick, Jasper, he’s a riot. Of anyone, he’s unique in the fact she rescued him thinking he was someone else. Which shows heart, something she didn’t learn from Volta.

Cynnara: (Hands Jay his Vanilla Bean Frappucino and sighs) Something not like that. He’s the Revolutionary leader from what I can tell. Though, something about him seems…different. I can’t tell what. He seems to be holding back information. Though the others in his group- Cain, Nyx, Indigo–they obviously have had access to one book each. Even Velveteen mentions it in her One Story Rule. She’s had access to the Book of the Spirit.

Jay: Mmmm Yummy. So what do you think is the whole endgame here? Why all the time travel and murder?

Cynnara: Murder- yes. Revolution- Definitely. Time travel? I’m not as sure about. Everything in the book took place in 2055. There was a flashback/vision sequence.

But whatever RV9 has as it’s main mission- it’s going to be explosive emotionally, physically, and psychically. Look at the colours on the pages with the ones who memorized their books. The depth of colours- the types of edginess you feel. The colours hint at layers of power and knowledge that what we see, may not be what truly is.

Jay: The lettering plays a role in that too. The font is easily readable while still maintaining that vintage style I mentioned earlier, and it never gets in the way of the story. Just like you want a good letterer to do. So, what are your final thoughts on issue #1?

Cynnara: Overall, I think this story is jammed with a lot to tell, almost overwhelming so, which is good since it leaves you with questions needing answers. But at the same time- I’m wishing I knew just a bit more to connect with Velveteen or Volta- who is the true hero here? Who is the villain? Or is that the idea-neither is truly a hero here?

There are so many others to learn about- Indigo, Nyx, Cain, etc. If there are Nine Books- the question is- where are the others who’ve read at least one? Can you read more than one? What happens if you do? Why is revolution needed? Where will it be? Why did Velveteen leave? And what is Jasper’s role in all this?

So, I have questions, but I loved the colours, the flow of the lettering was amazing. The artist, the colorist and the letterer did amazing jobs on this first book. I just wish it was about 4 pages longer to get a bit more into the mind of Velveteen, to get a better read of who she is to me as a reader.

Jay: I agree. Before we go to our final score, can I go back in time so I can finish eating this piece of cake again, without repeating the calories?

Jay: Dammit. Well, while I go shame-eat over the sink, let’s go to the scorecard (j.k. I would never do that)

comics review rv9
Add your voice!Join the conversation on Discord...
Join Our Discord