What is going on in New York?  I asked that question during my review of issue 1 of Sacred Creatures.  After reading through issue two, twice, I am still wondering.  Klaus Janson and Pablo Raimondi have a good idea for a story, but either the execution or the medium of comics is letting it down.  After discussing this series with another comic/fantasy fan, I have come to two conclusions:

1. Sacred Creatures should be a novel or series and/or 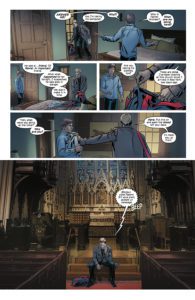 2. It should have been released as a full-length graphic novel.

When I read a comic or book, or watch a film, I want a character to stand behind.  That is not to say they have to be good; one of my favorite characters on page and screen is The Joker.  This story has nobody that grabs me.  Because of that, I really do not care what happens to any of them.  Then to top things off, the art style is still unappealing.  I really did not expect that to change, but one can always hope.

I write all of this to say that I will be passing up on reviewing the rest of this series and then giving it a second look when the trade paperback collection comes out.  Maybe it will be worth it then.  Feel free to leave a comment on here, or Tweet at me if you disagree with my review or if you see things that I am missing.