Currently celebrating the 30th anniversary of their classic album, Ignorance, Arizona thrashers SACRED REICH will kick off the North American leg of their 30 Years Of Ignorance tour on Sept 14th! The trek runs through October 7th. Support will be provided by labelmates BYZANTINE. See below for all dates! 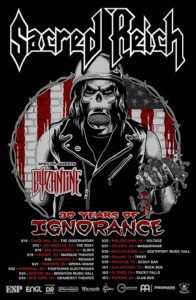