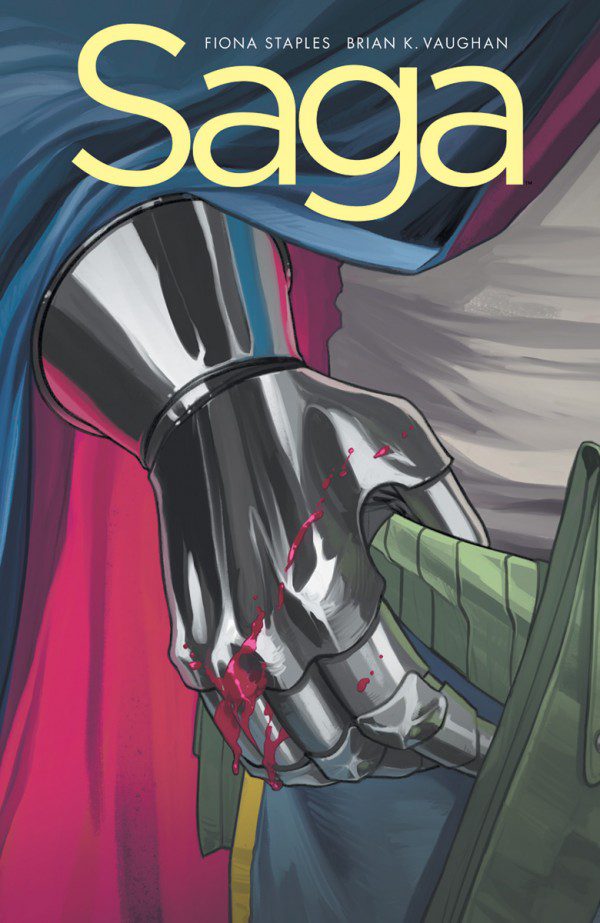 Saga #53 has a lot to offer. Tensions are really high as an article by Upsher and Doff is getting ready to be published but you can’t run a paper without some sort of political drama coming in from the side. While back with the gang, Ianthe is causing a lot of trouble as she runs into a few more from the group after her encounter with Doff from the last issue. The Will also takes some matters into his own hands as he has a conversation with Prince Robot and Marko. It’s a bit difficult going into what all happens here without spoiling anything, but what I can say is that you’re on the edge as you turn each page to see whats about to happen. Marko and Upsher are probably the big standouts in the issue with the way they try to handle their situations that they’re and the outcomes are a thrill to see.

Have you seen this:
Ordinary Gods #1 (REVIEW)

It’s also great to see The Will no longer a prisoner but his actions are going to leave his fans questioning him going forward. Prince Robot also shares another small bit about his past. From the beginning, we have always known he was a bit unstable in his head form his upbringing and the more he shares, the more you just feel for the guy. It’s quite amazing really to see him go from that jerk that was hunting a couple to a guy that just wants to raise his kid with someone he loves without the world knowing about him anymore. Which is funny because it’s exactly the same thing Marko and Alana want with Hazel.

I will always love the art from Fiona Staples and I’m always amazed with how she gets the series to look so fun behind it’s very dark curtains. I just love the coloring work here from the characters skins to their clothes. Everything pops real nicely and I think it really helps out, especially when we get to the darker times of the story. Saga continues to give us another thrilling issue with political comments, some good laughs, intense moments (sometimes sexual), and most of all. A world with a group of characters that you can’t help but fall in love with which is what makes every issue difficult to read as you wait to see what will happen to any one of them.