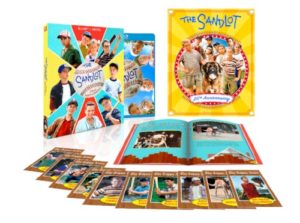 In this beloved family-favorite, it’s the early 1960s and fifth-grader Scotty Smalls (Tom Guiry) has just moved into town with his folks (Karen Allen and Denis Leary). Kids call him a dork — he can’t even throw a baseball! But that changes when the leader of the neighborhood gang recruits him to play on the nearby sandlot field. It’s the beginning of a magical summer of baseball, wild adventures, first kisses and fearsome confrontations with the dreaded beast and its owner (James Earl Jones) who live behind the left field fence. Soon nine boys have become best friends, Scotty is part of a team, and their leader has become a local legend in this hilarious and warmhearted comedy. 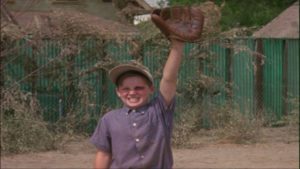 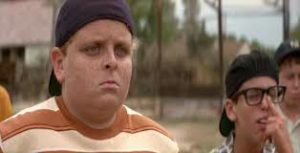 This crowd-pleasing gift set includes a set of 10 custom Topps® baseball cards — featuring Scotty Smalls, Benny “The Jet” and the rest of the ragtag roster — created exclusively for this release. The major-league treatment continues with an all-new booklet filled with behind-the-scenes photos from the film director’s personal archive and an all-new, full-color poster. So gather your best buddies together for a winning comedy-adventure and a whole lot of fun. Play ball!

Have you seen this:
WB Has a Zatanna Project on the Horizon

The Sandlot Twentieth Century Fox Home Entertainment
Are you an Insider?News, reviews, & updates are just the beginning.