When Savage Avengers was first announced it seemed like a marketing tool to produce a book that put Conan and the Marvel universe together, so I kept my distance. But month after month I keep hearing about how good this comic is, so I decided to check out the hype for myself. Here’s what I found in issue seven.

The beginning of comic focuses on Brother Voodoo who has been taken prisoner by the mystical madman Kulan Gath. After drinking poison and drifting into the spiritual realm Voodoo comes under attack. Meanwhile Doctor Strange and Elektra are hot on Voodoo’s trail as they fight the Hand for information on the mystics whereabouts. All of this leads to a side story of Conan traveling through the South American jungle only to be kidnapped himself and brought to….

… Latveria to come face to face with Dr. Doom.

I was partially correct in my assumption that this is a marketing ploy to wedge Conan into the Marvel universe, but it an entirely different matter when actually reading the book. It’s surreal to see the barbarian interacting with the likes of Doom and the exchange between the two has an unexpected bit of humor to it. These are two no-nonsense men who are so caught up in their own egos that even discussing the prospect of a meal is a contest of who is more macho and virtuous.

There are moments where Duggan’s dialogue shines. The exchange between Conan and Doom is a prime example, but there are also moments when the wording and dialogue between characters come off wooden and cliche. There are multiple instances in the pages featuring Dr. Strange and Elektra. Reading Strange blurt out “By The Vishanti!” comes off forced and stilted. It’s noticeable only because of how smoothly the book reads at other moments. It’s this jerky back and forth that takes away from the flow of the story.

As for the art, I’m no stranger to Zircher’s work and this issue is a lovely showcase for the artist to impress readers. The panel layout, pacing, character placement, and action sequences are some of the artist’s best work I’ve seen so far. The introductory page of Elektra is so dynamic that it overflows with action and drama.

But the real star of this issue is oddly the colors of Java Tartaglia. The use of color and lighting in this issue is superb. The work that Tartaglia has done here has only served to enhance Zircher’s already amazing linework and turned it into something truly spectacular.

While I was skeptical about the hype surrounding this comic I’ve come to find that the book deserves most of the praise. While I still have a hard time accepting Conan into regular Marvel continuity, that is my own shortcoming. The story being told here is compelling, full of action and worth a read if you enjoy more traditional superhero tales. 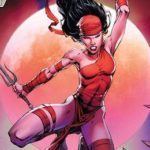