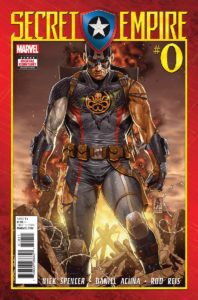 I’ve been on a bit of a hiatus from reading Marvel Comics. Though I was enjoying Thor and Amazing Spider-Man, I had to take a break. My plan to jump back into Marvel has happened quicker than expected thanks to the release of the next big event, Secret Empire. The story itself doesn’t really entice me since I expect Captain America to not be a Hydra agent by the end of it, back to the status quo. The difference here is the immense hatred people have toward this storyline and its creators. So in an ironic twist, it’s people’s disdain for Secret Empire that has made me so curious to try it.

The story opens with a flashback that reveals Captain America and Hydra had originally won the war, but the allies had obtained the cosmic cube and would change history. This will probably anger people further because it doesn’t leave a lot of wiggle room for Steve Rogers to get out of bed as a double agent by the end of the story. So i fully expect people to be upset about this revelation, but I’m under the impression that evil Cap is not going to stick. This makes the journey all the more interesting. On a side note, the first half of this issue is a much needed exposition dump for someone who hasn’t picked up a Marvel comic book for an extended period of time.

With the Chitauri attacking in space and the Army of Evil attacking in New York, the U.S. is forced to give Steve full power of the military. I regret not following along prior to this issue because this feels like a plan from Hydra that had a lot of layers, it was always to divide and conquer. The heroes in space are abandoned to fight the Chitauri who are searching out their Queen, who no doubt was taken by Hydra. I’m not a huge Captain Marvel fan, but I’m excited to see how she gets her team out of a horrible situation. Captain Danvers and the Guardians of the Galaxy are very important right now so I’m sure they will find a way. Having stayed away from many of the past Marvel events, it was actually cool seeing them team up together.

Have you seen this:
Chip Zdarsky talks Newburn, Daredevil and more on TLDR 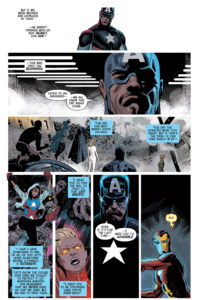 I never understood why Marvel has so many of their heroes and villains based in New York, and this issue highlights the silliness of it all. The Army of Evil are made up of villains that were brainwashed by Maria Hill and are attacking out of revenge; or at least that’s how it seemed before the bad guys leave and trap all of New York’s heroes. I was kind of bummed out to see this be a part of Hydra’s plan. The whole villains being brainwashed to be good and feeling violated is a very interesting angle. Since Zemo and his Army of Evil are a bit of an offshoot of Hydra, I’m hoping to delve deeper into their motivations. I also need to go back and read more about all this Pleasant Hill stuff.

Iron Man and Ironheart have been thrust into the leadership role now that the Defenders and space heroes have been taken care of. They realize something is wrong after the earth force field goes up. Ironheart is new to me, but I liked what little I’ve seen from her teaming up with Tony. Anothet team lead by Iron Man going up against a team lead by Captain America might just be in our future again.

Have you seen this:
DARKHOLD Omega # 1 (REVIEW)

I did like Acuña’s art on the main stories a bit more than the prologues. There were a few times I would have liked to have seen more of Steve’s emotions. The use of heavily shadowed faces to portray darkness within Steve’s character worked well, but it happens a lot in this issue. It just made him look perpetually pouty, but I did enjoy Acuña’s style for the most part. The colors were perfectly placed and the darker tone fits the story very well.

The way everything is setting up, it looks like it’s about to get a whole lot worse for the heroes before it gets better. Though it does have the feel of just being another big battle event, there are plenty of new elements that make this different. Captain America is going down a path that he may never be saved from, and the Army of Evil have added an intriguing dynamic. For me, the story hinges on those two things. Even thought the fighting is fun, Secret Empire is off to a strong start because of the personal drama of its villains.