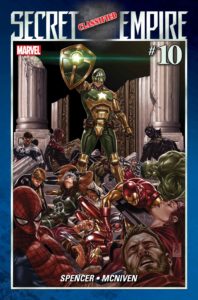 In the conclusion of the Secret Empire storyline, Hydra Steve has a brand new suit and is infused with the power of the Cosmic Cube. After trying to explain to his former allies that he wants to change the world for the better, pointing out their personal failures and the lives lost because of them. They point out, rightfully so, how his methods have led to the death and destruction that he is talking about before they attack him. He then erases them from existence and remakes the world in his own image, changing the history of the Marvel universe itself.

As Steve looks over the world he created, he’s confronted by Sam Wilson who has the final shard of the Cosmic Cube in a scene that is a direct call back to Cap confronting Thanos during the Infinity War. When Sam surrenders the shard and Cap’s shield back to him, Hydra Steve is surprised by a carefully coordinated plan by Sam and Bucky. The results of which allow for Kobik and real Steve to escape and confront Hydra Steve directly.

I don’t want to spoil the story more than the New York Post already did earlier this week, but the end of Secret Empire was better than the overall bulk of the story itself. It was overall satisfying, even though there are huge plot elements left that need to be addressed. The writing was done well. I think if Spencer wanted to write a treatise on what it means to be Captain America, he did well with this. The art was great to look at and there were some amazing moments in the narrative that I actually enjoyed.