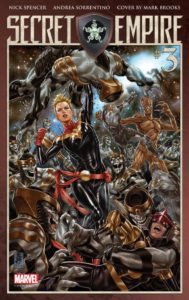 Hydra and the resistance are both searching for the cosmic cube shards, while Natasha trains the Champions to fight in a war. Secret Empire #3 is setting the stage for what looks to be an epic battle ahead, which may include the mysterious second Steve Rogers.

At the end of the second issue, we were introduced to a Steve Rogers that was trying to return home. We didn’t learn much more than that outside of the fact that he doesn’t remember much. Many people assume the Ultimate Captain America is involved in some way, but Nick Spencer is keeping the identity so close to his chest it’s hard to tell. Part of me wants him to be the real Steve, but Spencer did promise that Hydra Cap wasn’t a clone or doppelganger. The dying woman he saved from attackers seems to foreshadow big things ahead, and I admit, I am totally interested in the new Cap.

Hydra Cap is in full propaganda mode in this issue, and it’s really creepy. His conversation with Sharon and the ordered destruction of a holy palace in Atlantis, doesn’t leave me with much hope for the character. Which makes the introduction of a second Steve Rogers all the more crucial. It would have been tough to read this issue not knowing there was no hope for Cap. On a side note: The brief glimpse of Black Panther was cool. Knowing he’s out there and a force to be reckoned with was perfect. I just hope we see more of him before the finale. 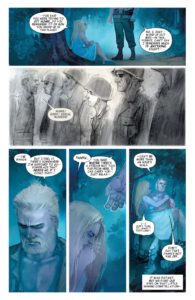 Black Widow’s refusal to work with the resistance bothered me at first, but this storyline of her training the young Champions has been great. I haven’t had the chance to read the Champions comic series yet, but they seem great. This issue did a great job of moving each story along, which probably means it will take everyone to defeat Hydra. The ending of Secret Empire #3 implies that this resistance off-shoot may have big problems ahead. The character reveal is bothersome, because they seem too stubborn in their ways to ever join Hydra. But I can’t wait to what he does.

I haven’t read any of the issues of Sam Wilson being Captain America, but it’s sad seeing him act the way he does in this issue. He’s still being a hero which is great, but he has no interest in helping the resistance. The Ultron/Hank Pym hybrid reveal caught me off guard but turns out Marvel has already been advertising him for future issues.

The story has me totally invested. I wasn’t a big fan of the last issue because it felt like more of a set-up, and even though there weren’t any huge events this time around, we got a little taste of everything going on. The artwork was phenomenal, Andrea Sorrentino and Rod Reis absolutely killed it on this issue. Everything was beautiful, especially the panels with the mysterious Steve Rogers.