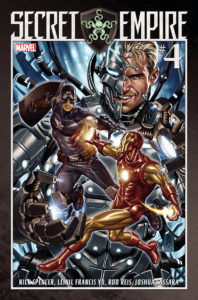 Pym Ultron throws the most awkward dinner part ever, while Punisher tracks down the ever-elusive Black Widow and her young team of Champions. The Steve Rogers doppelganger has found two friends that look very familiar. I wish they would tell us a little more about this second Steve, but they are teasing us little by little, and it’s working. All signs point to him being from another universe, but that seems a tad too easy.

I was worried that The Punisher being in Hydra wouldn’t make sense when we see more of him, and it doesn’t. He seems far too compliant to Hydra and more specifically, Captain America. Unlike Namor and Thor, who appear to be working with Hydra just to make peace and keep their people safe, Punisher shouldn’t have the same baggage to worry about. He just comes off like a good soldier and it’s bothersome to read. I hope they explain his motivations before this event ends. He is tracking down Black Widow, who is probably getting frustrated with the Champions holding her back. Their scenes are always great, and I don’t think they show them enough.

The highlight of the comic was definitely Ultron Pym’s dysfunctional dinner party. Hydra and the resistance are unruly guests, as Hank tries to get the Avengers talking to each other again. This scene was incredibly compelling despite me being tired of Ultron-related stories. The conversations between Ultron Pym, Scott Lang, and Tony Stark were so good. Even though I have been on a bit of hiatus from Marvel, it all made sense. In retrospect, Tony Stark was a complete idiot and he put everyone in danger, but it was all great. This fantastic sequence ends with the reader still wondering who is in control, Ultron or Hank Pym. Leaving it ambiguous was perfect and was creepy.

I’m all in on this art team, I couldn’t be happier with it. I admit, at first, it didn’t strike me as an art style that would work for a massive event, but I was wrong. There was one big battle between Hydra and the resistance that looked amazing. The action wasn’t confusing and messy despite having so many characters. The characters looked great too.

Have you seen this:
Shovel Knight Pocket Dungeon (REVIEW)

This was probably my favorite issue of the series so far. Though past issues had more surprises and action, this fourth issue had a little bit of everything.