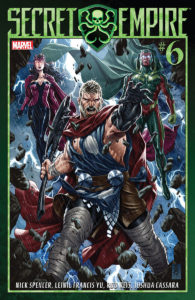 Hydra has found the base of the resistance, but they’ll need the help of a fallen Avenger to get in.

I’ve read superhero comic books where things look bad for the hero, but I have never read a bleaker single issue than Secret Empire #6. You go down the line of every single hero and there is doubt, anger, guilt, and a complete loss of hope. To be honest, it was a down right depressing issue. That’s good storytelling and isn’t the thing that drags this overall entertaining, story down a bit.

What bothered me most was how slow the story felt. I’d say only the last third of the issue actually picks up. It touches on all the plot points, but there is a decent amount of standing around and talking. Even though the ending was great, it felt like a chore to get to. With that said, there is a lot I did like about it.

Speaking of slow, we have been getting only hints of the second Steve Rogers. At the beginning of the issue, we see him as a captive and Red Skull hints that he is responsible for them being in that world. This is one of the most interesting aspects of the story for me because I have no clue what the hell is going on. I’m excited to find out what the deal is. As for Black Widow, she has to deal with the Champions who are getting tired of the way Natasha is going about things. She tells Miles Morales her motivation for working with them and it was compelling. Like a lot of characters in this issue, she feels guilt for what she has done and wants to make amends. 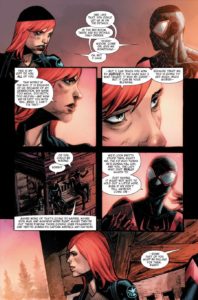 Guilt and regret were something most of the resistance had to deal with as well. Tony Stark’s conversation with Captain America was made even more powerful by the fact that he’s ready to take both of their lives. Their best frenemy relationship is a well Marvel goes to a lot, but it almost always works. Like Batman and Superman, they may fight but you expect them to eventually come together. Tony seems to have given up all hope of that.

The Cap/Bruce Banner conversation was cool but very long-winded, but the payoff was amazing. That Hulk sequence when he breaks into the resistance base was great and looked beautiful. I wasn’t feeling the art at the start of the issue, but by the time Hulk shows up I completely changed my tune. Those were some fantastic looking panels. One thing about Hulk’s return is that I didn’t read when he died, so I can’t imagine what justification Hawkeye had for killing his friend. So for someone who is just getting back into Marvel comics, I’m having trouble cheering for Clint. I clearly need to go back and read for context.

This was a slow issue, there is no denying that. But the plot did move along and the ending was exactly what you would want from this mini-series.