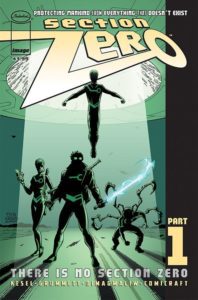 Section Zero #1 came out in the year 2000, but the series never finished. The imprint closed up shop halfway through the first story arc, after the release of issue #3. Now in 2019, after a successful 2017 Kickstarter, the series returns to finish what creators Karl Kesel and Tom Grummett started two decades ago. Section Zero remains relevant and enjoyable today due to Kesel and Grummett’s classic themes and interesting characters.

The roster of the secret United Nations group, Section Zero, grows over the course of the first few issues. Readers are first introduced to the rough hero Sam and his archetypal tattered leather jacket and 5 o’clock shadow, but the stereotype heroes diverge from there. Issue #1 provides the most characterization to the young boy who changes into a human bug. In interviews, Kesel and Grummett commented that the new issues of the series will see the characters age in real time, and the boy will be an adult during the latter half of the series. This change creates a number of narrative opportunities for the creative team to explore during the course of this six-issue series.

Kesel and Grummett made names for themselves during the 90’s with the creation of DC’s Superboy clone. Their art-style was always a little more subdued compared to the overtly muscled and sexualized trends of the decade. That subtler style plays well here and creates a title that still feels current today. The pacing and layout may be a product of its time, but thankfully the result is a denser issue that covers a lot of ground.

At the time of Section Zero‘s original release, the creative team called it a mixture of Jack Kirby and the X-files. This was a modern nod to the governmental conspiracies of the title and a classic reference to the team and world building that Kesel and Grummett created. Those same attributes carry it forward today for readers of any age.

Section Zero is a return to a long dormant creative idea and a return to form for industry veterans. Issue #1 is also enough to get any reader to return for the rest of the series.

Have you seen this:
Hawkman #27 (Review)