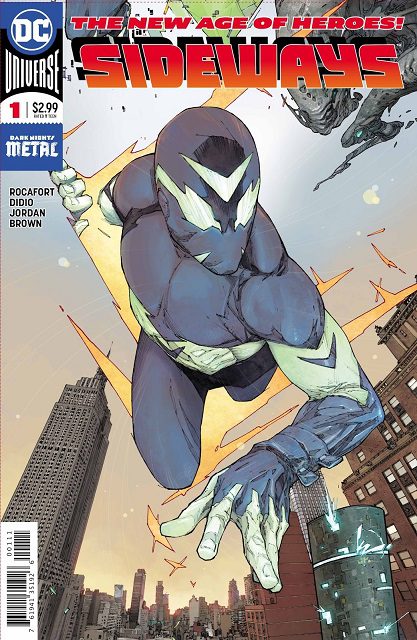 Sideways #1 is several things. It is a new a series featuring a new character spinning out of DC’s Metal. It is a near masterclass in balancing introductory exposition against the demands of story and pacing. It is a superior example of storytelling through art and layout. But none of this is why Sideways #1 deserves to fly off the rack. Truth is—I have read few comics in recent memory that were nearly as fun as Sideways #1.

Derek has the ability to create “rifts” to other places. He can see through them and even step through them sideways (hence the superhero name he chooses). It’s not surprising that Derek, being a teenager, would use his abilities to pop unexpectedly into his girlfriend’s bedroom before school. He’s showing off the costume his girlfriend (Ernestine) made. The visit is cut short, and he returns home where his mom gives him a ride to school. His mother is overprotective after what happened in Gotham, which has caused Derek a fair share of teasing. As Derek daydreams in class, the story flashes back to Gotham for three pages where his powers are more or less explained. Once school ends Derek dons his costume and starts shifting throughout the city while streaming his new vlog “Steppin Out with Sideways.” The excessive rift-making eventually attracts the attention of a very large antagonist.

DiDio and Jordan pepper the issue with exposition but avoid slowing down the story. The reader learns Derek has super strength because he’s showing off for his girlfriend. Derek’s mother, in a moment of maternal affection brought on by her overprotectiveness since the incident in Gotham, reveals that Derek was adopted. (This is not surprising since he’s a teenager of color and his parents are white.) The flashback to Gotham takes fewer than three pages and offers the briefest possible explanation without getting lost in the minutiae of Metal. 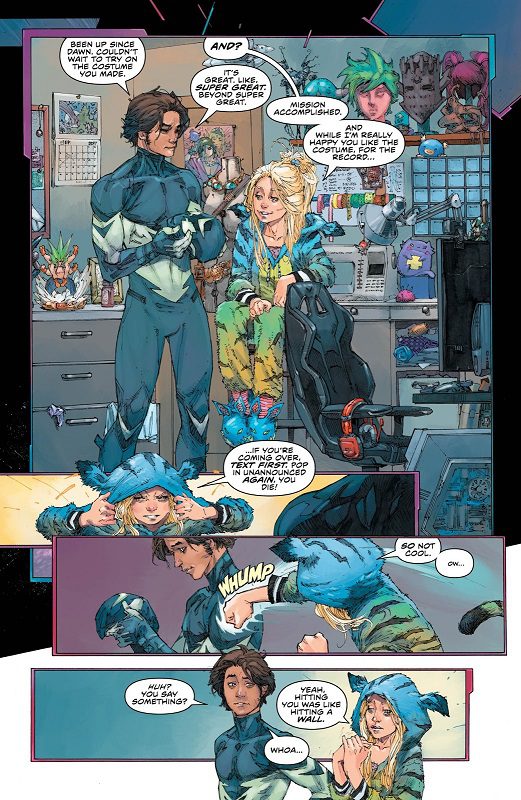 Derek feels like a teenager—and not a distraught one compelled to a higher calling but an honest-to-goodness teenager using his new powers to be popular. Creating a teenager isn’t easy. It’s not enough to draw him slightly smaller, write some classroom scenes, and have him hide from his parents. Kenneth Rocafort, Dan Didio, and Justin Jordan “get” Derek right from the outset. When in his girlfriend’s room he gets distracted in the middle of their conversation. When demonstrating his super strength he shows no regard for the mess he’s making. He ignores his mom on the drive to school but gives her a kiss on her cheek when he leaves. In school, he hides behind his earbuds. He avoids other students who talk about him behind his back (though loud enough that Derek can hear). His posture is slouched. His build is fit but lanky. Given the opportunity to be anonymous, though, Derek’s completely different: on his vlog, he’s expressive and gregarious.

Derek’s character is only one component of what sets the issue apart. Sideways #1 is a feast for the eyes. I’ve already touched on how Derek’s appearance factors into his characterization. Beyond Derek, though, Rocafort and Didio deftly add detail; the appearance of Ernestine’s room at the beginning of the issue, for instance, tells the reader a lot about her. What’s even more significant is the way the duo uses the layout as another storytelling device when Derek is Sideways; the panels frequently follow an up-down progression, sometimes diagonally, and often against a larger backdrop (like a cityscape). Meanwhile, every page has a “background” of sorts. No panels—even full-page splashes—go to the edge of the page. Instead, every page has a background of asymmetrical shapes, the color, and orientation of which varies by the page’s mood.

The term “funny book” isn’t terribly applicable to the vast majority of comics anymore. Sideways#1 isn’t funny in the sense that it’s a comedy, but it is a fun comic book. The visual style and detailed art creates a compelling work all on its own, but the charm is Derek. Rocafort, Didio, and Jordan have created a teenager who is so recognizable that readers can see themselves in Derek’s shoes, popping into their high school sweetheart’s bedroom just because they can. Derek gets to have fun, and it’s hard not to want to have fun with him.