Sight Beyond Sight in “He-Man/Thundercats” #4 (Review) 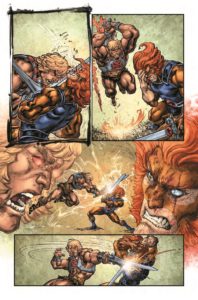 He-man / Thundercats #4 regains the exciting and tense tone from the beginning of this limited series. While the last issue leaned into the goofy villain humor that was part of Flimation’s classic He-man cartoon, the humor took a step back from the urgency and drama that existed in issue #2. David and Goldfine continue to script an exciting and world shaking cross over.

Last issue ended with Prince Adam dead and Skeletor and Mumm-Ra stopping the slack stick antics to unleash evil spirits onto Eternia. This issue finds the cast of characters preparing to engage the spirits, as Lion-o takes it upon himself to restore He-man to the land of the living. There are a few jumps in logic, but Lion-o flies off to Third Earth alone. Given that the workings of Mumm-Ra’s ever living tomb are not deeply developed in the Thundercats lore, David and Goldfine fill in the blanks and provide a narrative way for He-man to return. 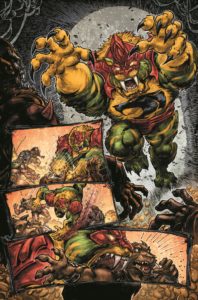 Lion-o’s adventures at Mumm-Ra’s tomb occupy most of the issue, but readers are treated to a battle that children of the 1980’s discussed on many an elementary school yard – “Who would win in a fight between He-man and Lion-o.” The added fan treat of this issue was Cringer becoming empowered from the Sword of Omen. The Thundercats powered Battle Cat was a fun surprise that played with the mythologies of the two franchises.

He-man / Thundercats has developed from a nostalgic curiosity into a solid cross over event. Williams II’s artwork remains consistent and part of what makes this cross over work. Williams II depicts the muscle bound action figures well and has captured many of the mannerisms of the cartoon characters. Colorist Jeremy Colwell’s work has not been mentioned, but it has become part of the tone and world this creative team has developed. Colwell’s bright pastels have a cloudy air about them that creates a dreamscape for this dream team cross over.