Sigi – A Fart for Melusina Review

Sigi – A Fart for Melusina is a new 2D side-scrolling platformer. Here you take control of Knight Sigi as he searches for Melusina, his love. The game consists of 20 levels with 5 of them being boss fights. Your main attack is throwing your sword as a projectile at your enemies. Don’t worry, you never run out of them. You can also jump on your enemies like Mario. Throughout your adventure, you can change your weapon depending if you find the item to change it. Think of it like Contra, whatever you pickup will replace what you have. I would’ve preferred an upgrade system though like in Star Fox 64 because one weapon in particular is far better than the rest. You can collect coins and letters to spell out Sigi that will grant you an extra life as well as items such as a shield that will do the same. 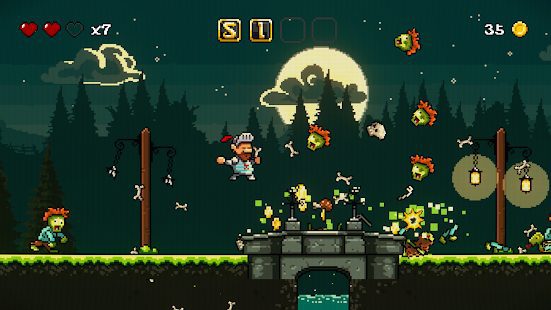 There are also secret paths to discover to find some of these collectibles. When you start the game and you find Melusina, the mermaid that Sigi loves. You mostly spend the adventure chasing for her. It doesn’t turn into a rescue until the very end. When landing hits on enemies, the screen will shake as an effect of letting you know the attack landed but when enemies fill up the screen and it constantly shakes. I ended up finding this far more annoying than anything. Levels are really short and the entire game will only take you around an hour to complete your first time through. Speedrunners can find a lot of enjoyment here as the mechanics are solid and you can find some ways to complete levels quicker than usual. The pixel art I found to be a bit more generic, nothing really stylistic enough to standout among others like Adventures of Pip or Shovel Knight.

The game is still offers enough fun to go through at least once. There seemed to be a bit of inconsistency with its theme, especially with a few of the bosses. The game has some crude humor with Sigi’s farts at the end of each level which is fine but then you have a final boss that looks like a famous wrestler and I’m not sure how this was suppose to fit in since the game doesn’t set itself up to make pop culture references. The end of the game gives you a percentage of how much you actually completed. There’s nothing telling you what you missed so it’s a trial and error thing. The game isn’t perfect but if the team continues on another game, there definitely some small improvements they can make. You’re definitely getting what you pay for here. Not the best platformer but still fun enough to take a look at once.