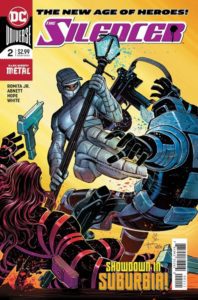 Silencer is fighting for her life as some of her former colleagues have come after her and Talia Al Ghul. She’s already taken out one and now the other two are trapped in her Zone of Silence. After taking down another one, she turns to Talia for answers, but there isn’t time to get any as the last of the hitmen grabs her. She re-establishes the zone in enough time to take down the last assassin and calls her old handler for clean up before trying to get back to her life. As the cleanup crew gets to work, an old friend lets her know what it going in the organization and gives her the price for this particular job.

As she gets back into the swing of her everyday life, she decides that she is going to end this once and for all. After her husband and child leave to start their days, Honor sets up some elaborate security before leaving her home. She decides to call into her old job and arrange a meeting with the current head of Leviathan in order to discuss terms of her staying out of the conflict the organization has become embroiled in. She decides to go in uniform to the meet and the meeting does not go as she hoped, leaving Silencer in the position of having to deal with an organization that has betrayed its own codes and put her in the crosshairs. 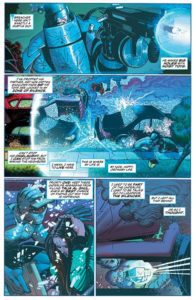 Silencer continues to be visually stunning to look at and Romita’s art is always amazing. The story by Abnett is tight and there are some awesome action and intrigue elements in the story. One of the best things that it does it keep me interested in not only the big picture part of the story with Honor and Leviathan but also Honor’s quest to keep both parts of her lives separate. It’s a tightrope that takes a lot of care to portray and I appreciate how well it’s being done in this issue. If there is one thing that is a small negative is that Honor’s reactionary measures in this issue and the last contrast with her purported reputation as a skilled assassin. Other than that, it’s a great issue that has hooked me to read more.

comic book review DC comics the silencer
Are you an Insider?News, reviews, & updates are just the beginning.