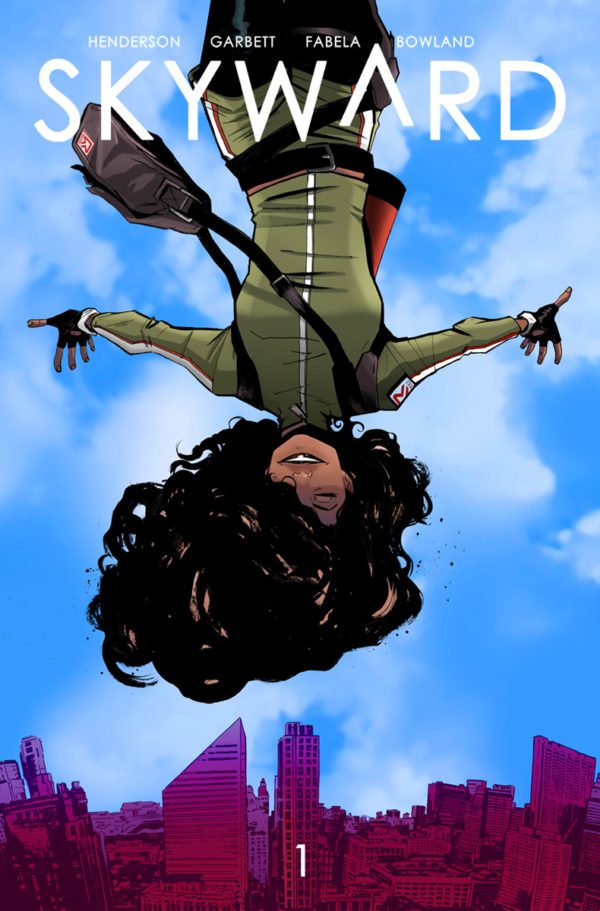 Skyward #1 creates a world light on gravity but heavy in potential. Lucifer Showrunner and writer Joe Henderson creates a world at the edges of science fiction that is believable while still fanciful. Earth experiences a sudden shift in gravity which creates an exciting opening to this new series. The story of humans and society after this change is ripe for exploration and broad enough to provide Henderson a vast world to spin his story. Henderson’s track record in television writing provides comic readers an example of his ability to sustain character development and fan engagement in a serialized format.

The main story picks up 20 years after a loss of gravity sent society spinning. Henderson doesn’t invest time in or get bogged down with describing what happened or explain the science behind it. There are opportunities for poignant flashbacks as the series moves forward, but Henderson wisely doesn’t linger on setup. Readers are thrown into this low gravity world after the dramatic opening. The main character, Willa, is longing for her freedom like young adults of any generation. But unlike the current world, earth’s low gravity creates a sense of constant danger. Wide open spaces and the open road are potential death traps and no longer the idyllic coming of age narratives.

Lee Garbett’s artwork speaks volumes in the opening scenes and continues throughout the issue to silently create a world for readers to connect with. The artwork creates a sense of movement and flow for the characters as they navigate their daily lives. And Antonio Fabela’s colors hint at a worn society that has struggled through these changes in gravity. Rather than explaining through dialog boxes, Henderson, Garbett, and Fabela create situations that explain the world through Willa’s actions. Weight, momentum, disability, body image, exercise, and even violence all take on different meanings in this low gravity reality. Garbett and Fabela’s artwork creates this new world and Henderson’s writing makes readers care about it.

The artwork creates a sense of scale and visual logic throughout each page and the writing fills those pages with characters that hold promise and excitement. If Henderson can sustain this momentum, Skyward will be a series, and a world, worth exploring.