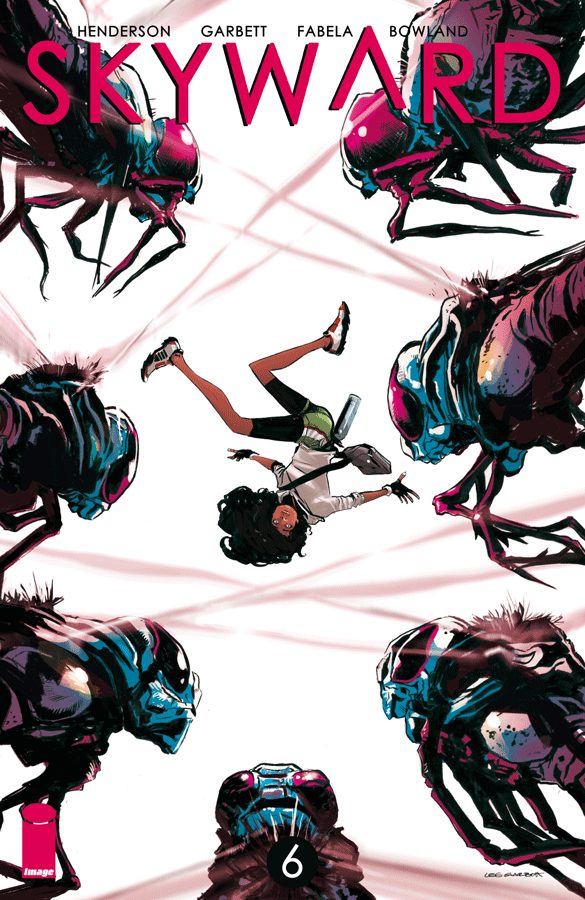 Skyward #6 begins the second narrative arc in the series which through five issues perfectly blends an ingenious premise with intriguing characters, high drama, and a healthy dose of humor. It is this combination that makes Skyward one of the most exciting ongoing series to date.

Issue #6 picks up shortly after the heart-wrenching and mysterious ending of the previous arc and does not miss a beat in continuing the strong storytelling. Henderson continues to shine with his excellent pacing and strong dialogue. There is not a single narrated thought within the issue and yet, through his sharp dialogue, we understand Willa’s grief as well as her caution in opening up to Edison. For Willa, camaraderie, affection, and (I think) attraction come naturally with regards to Edison but trust does not. In this way, it is easy to see how even though her father is gone he continues to impact the story in meaningful ways. For his part, Edison is warm, kind, and encouragingly okay with being left out of key parts of Willa’s plan.

One of the other strengths of Henderson’s writing is how he allows space for panels with minimal or no dialogue at all. In these panels, he allows Garbett’s art to do the heavy lifting. Having left the cityscape of Chicago, Garbett gets the chance to try some new things–like imagining how a train might run in zero-gravity and what would happen to bugs in a world without gravity. Beyond those new ventures, he maintains his attention to detail often taking time to linger on the faces of Willa or Edison. In these moments, Garbett captures their emotional frailty perfectly. The softness of Edison’s glances towards Willa are contrasted with the harsh demeanor of Barrow or the sleazy looks from a reporter who stumbles upon Willa’s hideout. These divergences help develop each of the characters in unique ways.

Regarding those bugs I mentioned above, this arc is called “Here There Be Dragonflies” for a good reason and I must admit that I’ve never been so equally disgusted and blown away–another testament to the art.  Much like the art, Antonio Fabela gets a chance to do some new things with the colors once they leave the city. The yellows and blacks with which he paints the forest help capture an ominous and wild environment and the blue, pink, and black with which he colors the dragonflies are equally beautiful and grotesque.

Ultimately, Skyward is the story of Willa and in this issue, as in all the other issues, she proves to be remarkably compelling. Even amid grief and loss, she shows herself to be clever, determined, and heroic. In the previous issue, Willa’s father got the chance to play the role of hero–to be the father he always wanted to be. Just one issue later, Willa gets the chance to play the hero. The issue ends with Willa leaping out of a train to save a young girl’s father. The final page is jaw-dropping. Willa is in the distance surrounded by gigantic dragonflies and looks like Superman about to fly up, up, and away. There is no dialogue to speak of and yet the page reveals so much about who Willa is. Willa is the hero of her own story. She is determined to fix the world but knows that the point of doing so is to make the world better for the individuals who inhabit it. That’s why she gladly jumps out of a train to save someone and she’s a large part of why Skyward is so good. I can’t wait to see what this brilliant, heroic girl will do next.