SLAM! The Next Jam Review 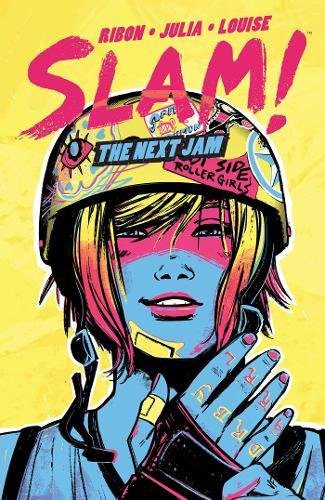 SLAM! The Next Jam
Image Comics

SLAM! The Next Jam is a comic series about a couple of girls that joined a roller derby team and this trade is a continuation of the initial 4 issues from the first SLAM! book. Here you’ll get a collection of 4 issues that pick up where the last book left off with a few different things going on this time around. Maise is mostly spending her time trying to recover from her injury and get back in the ring with her team. Jennifer has to go through some repercussions with her recent actions and is forced to train a new group of women. I mainly found that the overall story here doesn’t have a lot of focus. There’s a lot going on and some things are just left open and unfinished. Maise has a good growth showing how hard it is for her to work her way back into skating, not just physically though.

The thoughts of getting hurt again scares her but she doesn’t let that push her away which is one of the more enjoyable moments here. She has some rough patches with her boyfriend Leo but it’s kinda just left where you just assume things are completely fine. I liked how she wanted to try and discuss just letting her have the roller derby life. People need things for themselves away from others. Jennifer’s adventure as a new coach done fine as we see her inexperience causes a lot of ripples with the new crew but she we see her being very open-minded to make things better but the best part is how she knows not to just let her feelings in the way to push her team to be better because she knows they can be better. There’s a bit of an exploration with her and Kristen. We learn that she’s going through some major personal troubles but it isn’t explored all that much. I also feel like she tries to force the relationship onto Jennifer.

I wasn’t enjoying the illustration as much here like I did with the previous book. It just felt like a bit of a step-down to me compared to the last book. At the end though, I was a bit underwhelmed with this trade. I really enjoyed the last one and I think this one just threw too much in when they only had 4 issues to work with. If it would’ve just been about Jennifer being a coach and Maise working on her rehabilitation training, I think it could’ve been a more enjoyable book that focuses on the growth of these two women in a sport that they continue to grow to love.