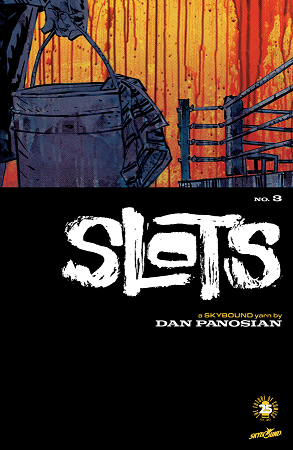 At its core, Slots is a high stakes story about family and relationships, all wrapped up in the grimy, seedy dressings of Las Vegas.

Almost every scene in Slots builds the interpersonal relationships between all of its interesting characters, and it’s fascinating to see these old friends meet again. Even though you may not have all the context of the character’s previous interactions, you can still feel the tension between them, and the story sucks you in, leaving you wanting more and more if only to just find out where these characters end up.

Our protagonist Stanley Dance is not necessarily a good person, and that’s fine. Ex-fighter and deadbeat dad, his return to the land of Las Vegas in a tale of redemption is one of the most interesting stories I’ve seen in this setting. While still a mystery, every piece of his backstory is so intriguing and you want to know how he became the man he is today.

This issue has Stanley return to the ring for another fight, but that really isn’t the focus of this issue. Instead, it’s the actions and reactions of everybody around Stan as they witness his changes between now and the man they used to know, and personal highs and lows of their own lives, using the fight as more of a backdrop in the story. The casino scene, in particular, creates a fantastic sense of tension and dread, leading up to one of the high points of the issue, subverting expectations and delivering with great emotional impact.

You really do find yourself caring for just about every character in this story, as Dan Panosian masterfully scribes their personalities and makes them feel like people you would actually meet in real life. They aren’t perfect. Not even close, and that just makes them more endearing. They make mistakes, they don’t always do the right thing, but then again, who does? You feel awful watching them hit their low points, and you absolutely feel a sense of triumph watching these characters succeed.

I can’t wait to see what Panosian has in store for future issues and to see where he takes these characters on this emotional roller coaster of a comic.  An absolute must-read for anybody looking for a grounded story about real people living their lives in this sleazy world.