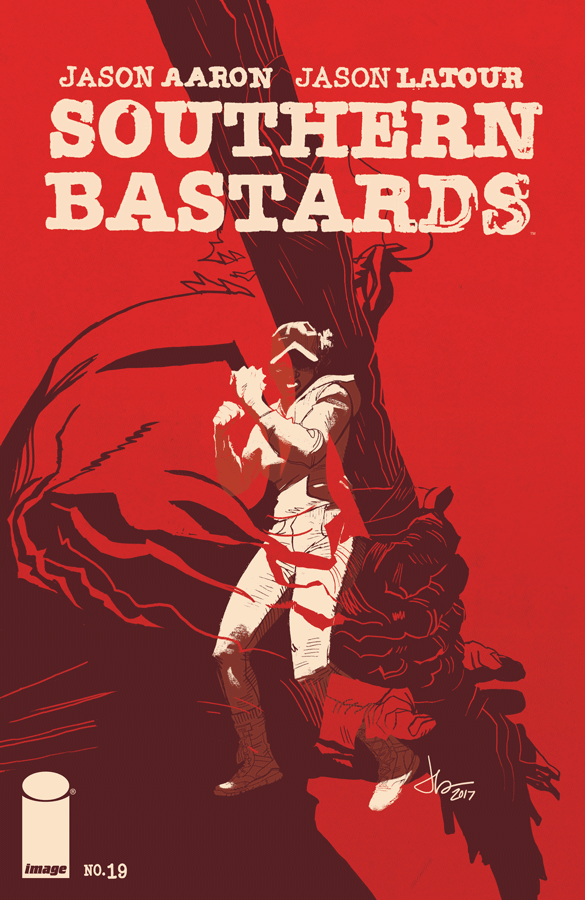 The creative team of Jason Aaron (Doctor Strange, The Goddamned, X-Men) and Jason Latour (Scalped, The Expatriate, Spider Gwen) return after a brief hiatus and one can definitively say they have not missed a beat after their time off. Southern Bastards issue number 19, part of the aptly titled “Gut Check” arc, is one of the more brutal issues of Southern Bastards to date. The introduction brings us straight onto the gridiron as the Runnin’ Rebs are about to learn a hard lesson on violence and winning from Coach Boss. A loss for the Rebels is a loss for Craw County, and the grisly Coach will not see his kingdom fall any further into the clutches of McKlusky, the recently introduced grease ball mobster complete with a pet monkey on his shoulder.

Each panel is drenched with sweat from the southern heat, providing the reader with the atmosphere of gothic horror mixed with a Faulknerian southern drama. At nearly 20 issues in, and despite all the great things we’ve seen, it feels like Southern Bastards is really getting into the meat of the story. Coach Boss continues his fall from greatness but will he eventually have to pay for his sins? It looks like the tide is turning, Alabama pun intended, for Coach as the walls are closing in and he’s losing what few friends he has. The perils are growing for Coach as we not only learn of the new factions forming around his demise but we also draw closer to the explosion of the ticking time bomb known as Roberta Tubbs; a character whose payoff has been waiting in the wings since the first arc. Finally, after being teased with Roberta’s vengeance arc for months, we finally see her and Coach Boss in the same panel. Trust me, you’ don’t want to miss this.

Have you seen this:
Sex Criminals # 30 (REVIEW)

Southern Bastards continues to be in my top five must-read comics. The team of two Jasons are particularly adept at telling beautiful and violent work and the story here jumps off the page. Very few series are able to continue to ratchet up the tension for this long and still maintain their continuity and brilliance, yet Southern Bastards remains on track with top-notch storytelling and world building. Longtime readers of the series will be chomping at the bit to find out what happens between Roberta and Coach Boss and it’s clear that it will be one hell of a battle.