The Good
Within the first 15 minutes of the movie, and many times throughout, we get a ton of reminders that this Sony/Marvel partnership is the real deal. There are a lot of intentional and purposeful connections made to let us know that Spider-Man is definitely connected with the Avengers in more ways than one. There are a number of references to both the Avengers movies and to Civil War for you comic movie history buffs.

Since this was a Marvel production (as part of their deal with Sony) there’s plenty of “Marvel fun” from beginning to end. There are a number of funny moments that certainly help to keep the movie light-hearted and entertaining. A lot of the comedy comes from the supporting cast. Jacob Batalon (who plays Ned) has a lot of humorous scenes as he plays Peter Parker’s best friend. Jon Favreau (“Happy”) and also Zendaya (“Michelle”) also have a few quick funny one-off scenes as well. For the few scenes he was in, Hannibal Buress was comical too.

While the internet was making it a big deal, I actually liked what the film did with Marisa Tomei’s version of “Aunt May”. The movie didn’t oversell her character to be the hot cougar everyone may have thought her to be. Once you see her caring and nurturing side with Peter, all those other ideas about her kind of go out the window.

Unlike some of the other past Spider-Man movies, I thought this one did a really good job in setting up potential side characters for future films. None of it felt rushed, and the characters (even if minor) feel like they have organic origins now. Speaking of which, there are many obvious Easter eggs throughout this movie. If you’re a Spider-Man fan (of the comics or cartoon), you’ll probably pick up at least 85% of the hints that are left. Certain characters are obvious clues to other characters’ existence and so on.

As for Spider-Man himself, the concerns of him being too young should be quelled. His youth actually serves a great purpose in showing his inexperience at being a superhero. That leaves a lot of room for us (the audience) to grow and relate to him. The film does an excellent job of putting Spidey in situations where he shows not only his inexperience but his maturity as well over time. I was really happy to see him in situations where he couldn’t rely on his web shooters, for example. I also really appreciated the fact that they showcased his intellect as a tech genius.

Contrary to the trailers, I’m also happy to let you know that Tony Stark/Iron Man does not over take this movie at all. He’s probably in this movie for about 10-15%. This is totally a Spider-Man/Peter Parker story.

As for the villain, Michael Keaton was at his best in my opinion. I personally don’t think that he suffered from the “MCU Villain problem” at all. While they didn’t use the traditional Vulture from the comics, they gave him a much more grounded and realistic approach. I thought that he posed an excellent challenge to Spider-Man and that’s really all you can ask for from any villain. The reveal does help add some level of intensity to the film, but I just think that they could’ve had the same effect without letting the cat out of the bag the way they did.

The Bad
I’m going to start off with my biggest grievance just to get this off of my chest. I am really disappointed and almost frustrated with the way this film handled Spider-Man’s powers. More specifically, they made his “Spidey Sense” practically non-existent. In my opinion, that’s almost like de-powering Superman’s strength or making him jump rather than fly. I just think that Spider-Man’s Spidey sense is an attribute that makes him really special and unique. Unfortunately, in this film, they’ve reduced him to simply having really quick reflexes.

While many of the supporting characters and scenes in this movie were indeed funny, I think we could’ve done without a lot of them. The movie’s run time is about 2hrs 15mins, and it really felt like some of the funny scenes were just added fluff. For instance, if some of the scenes with Ned or “Happy” were removed, I don’t think that the movie would’ve suffered at all. As a matter of fact, a lot of their scenes would’ve probably been better served as additional features on the Blu-Ray DVD instead.

Given the approach to making this a younger teen movie, I found it strange that this film included references to teen movies from the 80’s. For example, there’s a direct reference to Ferris Bueller’s Day off which I’m not sure many people under the age of 21 have even seen. It’s not that some of these references are bad, I just don’t think they’ll really resonate because this movie comes off as though it’s directed for people ages 13-25. (I’m not counting comic book movie fans only because we’re already too heavily invested in these movies. They know we’ll show up for this regardless.)

The last issue is that I really am not a fan of how careless this movie deals with Spider-Man’s secret identity. While the writing does make sense in terms of how they handled it, I simply don’t believe it was necessary to have certain individual(s) discover it. (You’ll know what I mean when you see it.)

The film will probably be offered in some enhanced viewing formats like 3D and Dolby Atmos. I got to see it in Dolby Atmos, and while the sound technology is amazing, I just don’t think that Spider-Man: Homecoming is the right movie to see in that format. Nor is the movie necessary to see in 3D. I mean you can obviously choose to view it that way, but there just didn’t seem to be anything memorable that the 3D or Dolby will leave you with. So you can save a little money there.

I left the theater liking Spider-Man: Homecoming a lot, but not necessarily being Wow’d by it either. This felt more like the Disney XD version of Spider-Man. (Take that however you wish) The movie is really fun and entertaining, but it does have room for improvement. Either way, Spider-Man Homecoming is a definitely worth the watch in theaters. Be sure to stay until the very end. There are TWO end credit scenes. 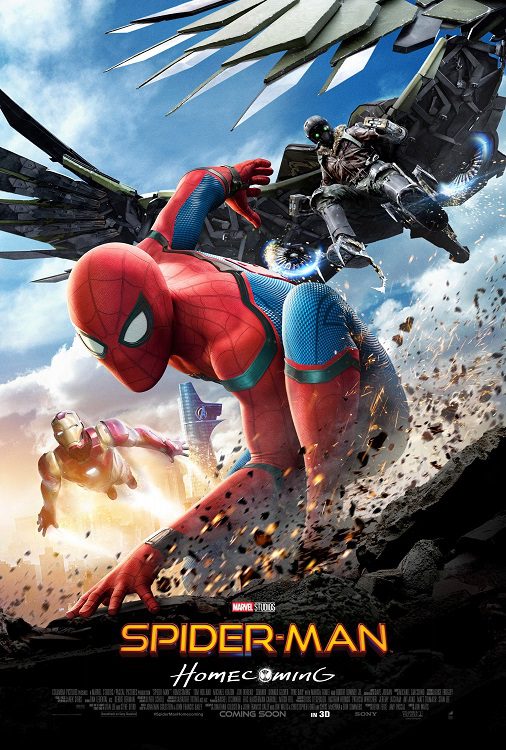