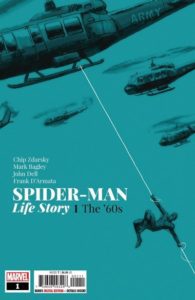 Spider-man: Life Story‘s premise is that Peter Parker aged in real time. The book starts in 1966 and after four years of trying to balance being a superhero, a student and friend, the cracks in Peter’s life are starting to show. This limited series, written by Chip Zdarsky, will move through the decades of Peter’s life alongside American and world history.

Zdarsky is familiar with creating a more personal side to Peter Parker with his work on Peter Parker: The Spectacular Spider-man. That experience and willingness to spend time in the life of Peter is what makes this first issue successful. Thankfully Zdarsky doesn’t give Spider-man the Forest Gump treatment and refrains from hopping around through big events or battles in the Spider-man canon. Instead, the issue focuses a few days around Flash Thompson leaving for Vietnam. This focus still provides opportunities to explore Peter’s life at Empire State and a battle with the iconic Green Goblin, but the heart of the issue is Peter wrestling with his power and responsibility as it relates to serving in Vietnam. The book could have easily slipped into a “What If” tale, but Zdarsky keeps the narrative grounded and rarely beyond the scope of Peter’s friends and family. 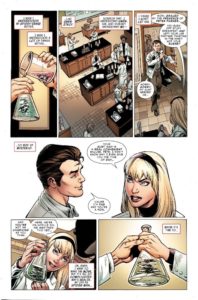 While this grounded approach appears to set up themes and plots for future issues of the series, Zdarsky leaves a lot of plot threads hanging. Two characters discover Peter’s secret identity, one is wrapped up surprisingly quickly, but may return later in the series. The second discovery is left unsatisfyingly unresolved. The issue clocks in at only 33 pages and is too thin for the scope that is attempted. The nods to other villains and events are appreciated, but most Spider-man fans will finish the issue wanting more. Zdarsky creates a number of interesting situations but resolves a few of them. That may be the intent of the first issue, time will tell.

Mark Bagley has drawn Spider-man on and off for decades and his style always captures a fluid Spider-man and a softer, human Parker. The ink and color team of Dell and D’armata spread a faded color palette that feels appropriate for the time period. The artistic style works well here and should provide a consistent design as Peter and his world age over the course of the series.

Spider-man: Life Story is a wonderful premise and a solid start to the series. There are missed opportunities since the concept deserved a wider breadth. Marvel could have published a mini-series for each decade and still left fans with unanswered questions. Fortunately, any Spider-man fan with at least a passing awareness of the character will find something to enjoy, even if the book is over too soon.