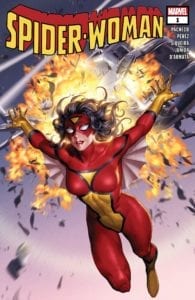 So, there’s a superhero that has my first name? (There’s two, but let’s focus on this one). I never found a character that had the name “Jessica” that felt like someone I could feel proud sharing a name with. I found Jessica Jones. SWEET! And now, I share a name with Spider-Woman. Do you know how I longed to have Spidey powers when I was younger? (Well, I also wanted Wolverine’s claws, and Mr. Fantastic’s stretch power, but that’s another story). I tried to use floss as my spider web to get up the stairs… it, ah… didn’t work. In the age where young girls are getting more and more superheroes to look up to, it’s time for Spider-Woman to take the stage, as a kick-butt female who, actually, is very relatable for this day and age.

We don’t get much time to get to know her and what led up to her life (as this character as existed long before this comic), but we get a hint at her home life, but we get the bigger impression that something is going very wrong for Miss Jessica Drew… which is confirmed when she pukes up some sort of radioactive liquid. Good times, good times.

The writing is spot on. I have to say it didn’t take long for me to feel a sort of kinship with Jess (the name helped), but she felt real. Especially with the prologue at the end of the comic. She just wants to do what’s right, and to support her family, but she struggles financially – something that is incredibly relatable in today’s financial climate. The art is good, too. It sports the familiar style of today’s comics. I used to really despise this look, but the more I read these comics, the more I feel it to be comforting… until I see those comics where the style is TOO streamlined, with extremely perfect lines.

It’s a great start for a new generation to become introduced to Spider-Woman.