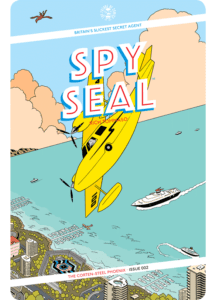 Malcolm Warner, better known to us as Spy Seal has his first mission. He is sent to the French Riviera where he will meet up with Kes, a seasoned agent. She is there to both teach him the ropes and watch over him. We all know how that first day of work can be. What they were not expecting is for Malcolm to form feelings for this lovely bird. What can we expect from an international seal of mystery? This should be par for the course at this point in spy history.

This issue of Spy Seal feels like it could have inspired James Bond. Not only do we get the possibility of a 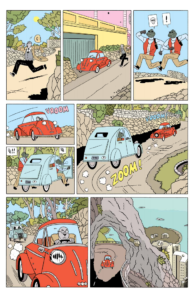 love story, but an awesome car chase and plane troubles. These are things I would not have expected to see from a comic with animals as the main characters. Rich Tommaso makes this work. Even though they live on our planet, they make it theirs. There are even a couple of parts that I did not question until after I read this issue.

The first question I have is the obvious one. Can we have inter-species relationships? I am not against them, of course, but how does a seal and a bird… you know? My second question only makes sense after you read this issue. Why does Malcolm fly to the rendezvous spot and Kes go by land? Maybe it was my own bias towards mammals versus birds. I need to lay those ideas at the door before issue three comes out next month.