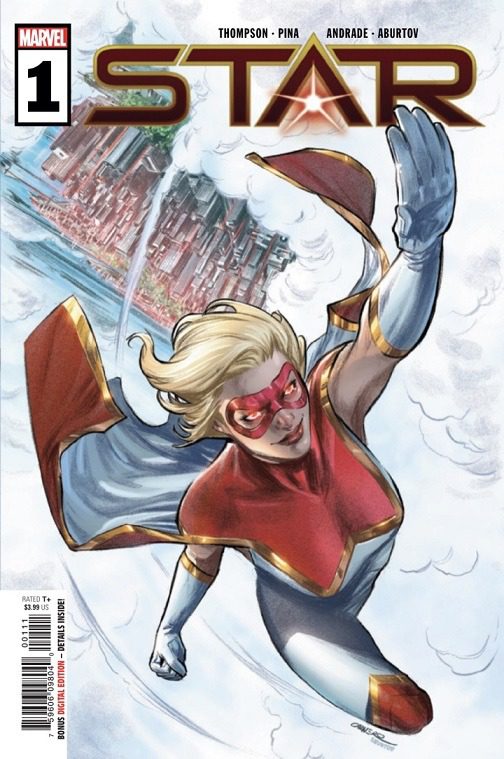 Having her first appearance in Captain Marvel, Star gets her own spin off series. If this seems like déjà vu that’s because Marvel has a history of doing this. Many of their current popular characters share this similar trait. Those characters include, Spider-Gwen, Ms. Marvel, and Gwenpool.

Star is a follow up, that sets out to answer the many questions that left readers in the dark from the Captain Marvel series. One of the major plots points of this series is how Ripley ended up with an infinity stone in her chest. Why was she chosen and how will she figure this out on her own. We get many cameos from the friends of Captain Marvel and with also some who want to take advantage of the situation.

Kelly Thompson keeps the story centered on the aftermath of Ripley being defeated by Carol. This allows us to stay with her in her struggle in facing reality and finding out how to control her new power. Being able to stay with the character allows Thompson to develop her with the same style as she was written in Captain Marvel. Very few characters get this treatment so it’s great to have this stability.

Star is a strong entry in the Captain Marvel spinoff universe. Ms. Marvel has been a major staple for Marvel and from what Thompson and Pina have created, it sets a strong foundation for the series and the character. There are some flaws, as readers need to read or be familiar with the story line from Captain Marvel. The flash backs give little details and makes readers do  their research if they just picked up this issue.

Marvel Star
Add your voice!Join the conversation on Discord...
Join Our Discord