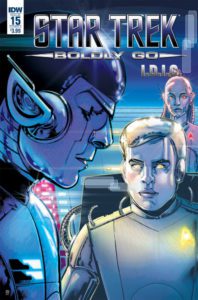 (In the voice of Majel Barrett-Roddenberry) “Last time in Star Trek Boldly Go… an unknown phenomenon has brought many different versions of Captain Kirk and crew together in strange and different worlds and combinations of history.”

**Disclaimer: Getting into this arc mid-stream so my earnest apologies**

We see that we are in a world not like our own but one where botanical lifeforms rule the world and, not unlike our Kirk, has grown in Captain Kirk. Not surprisingly, their ship runs into the anomaly where the other versions of the Enterprise now lay and then Kirk gets pulled from his ship and dropped onto a planet of lush vegetation and a non-botanical Lt. Uhuro. With this group, we also run into a female Captain Spock and a gaseous Scotty who all are figuring out how to get back to their ships but get a little diverted since they are on the pleasurable planet of Risa.

Elsewhere, we see our Kirk, along with a human-embracing Spock, female Chekov, and android Sulu(?), kneeling in front of empress Khan in a world in which the Augments had beaten humanity and have enslaved them. This Khan seems to be about as mad as any Khan we have seen previously and pits Kirk and Spock to combat in which this Spock gets to take out a little satisfaction on Kirk for the death of his wife and Kirk uses a Vulcan Neck pinch to defeat his foe.

One final view of this skewed universe shows us having two Uhuras meetings each other (ours and android) on Vulcan that survived the attacks from Nero due to him taking out Earth before being defeated on the way to Vulcan. Along with Captain Jane Kirk we see Bones whom (apparently in this Uhura’s and Spock’s reality) was dead along with Kirk fighting Nero. Before Spock and Uhura can be married here on Vulcan, Nero returns from his defeat with a powerful armada, sharing both their future technology along with Romulan cloaking technology to attack Vulcan.

Each Kirk hears an ethereal voice that calls out to them that speaks about being prepared for something bigger. Our Kirk believes it’s Q but this seems to be something far bigger and potentially far more dangerous.

Tearing into this issue was exciting and, while I’m not caught up to speed yet on the arc, it was plenty to grasp the attention and pull you in. Catching the subtitle I.D.I.C. greatly reminds me of the Vulcan philosophy and its meaning (Infinite Diversity in Infinite Combinations). Reading the last two pages sucker punches you and hits you with a huge lead into the next issue.

The artwork on display here by Tana Ford is amazing! It’s as if she were really giving each version of each character their own similarities and uniqueness (noticeably were the details on the botanical Kirk). With art and story giving us high marks, the next issue can’t come soon enough!