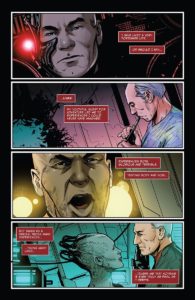 The premiere has occurred and Star Trek Picard is here! Along with seeing how retired Admiral Jean-Luc Picard is doing, we meet up with a few new individuals. In this final issue of the prequel arc, we see just how Picard resolves the conflict in the colony of Yuyat Beta.

The beginning of the issue reminds us of just how Jean-Luc Picard has lived through so many lifetimes of his own and the lessons he’s learned. The next portion of the issue gets us right back into the thick of things with the Romulans. When interacting with Romulans, there will always be lies, deceit, and subterfuge. We see that displayed in excess with every interaction that occurs. As the issues wrap up, we see just what sort of world Picard has helped build going into the new CBS All Access series.

This issue had much of the same excellent artwork as seen in the others. While the visuals were stunning, I felt that the story lacked a little something. The story was brought to a high climax only to drop off in fits and spurts. It was still a decent storyline though it could have been a little more eventful. The series wrapped up nicely and was still a very pleasant ride.