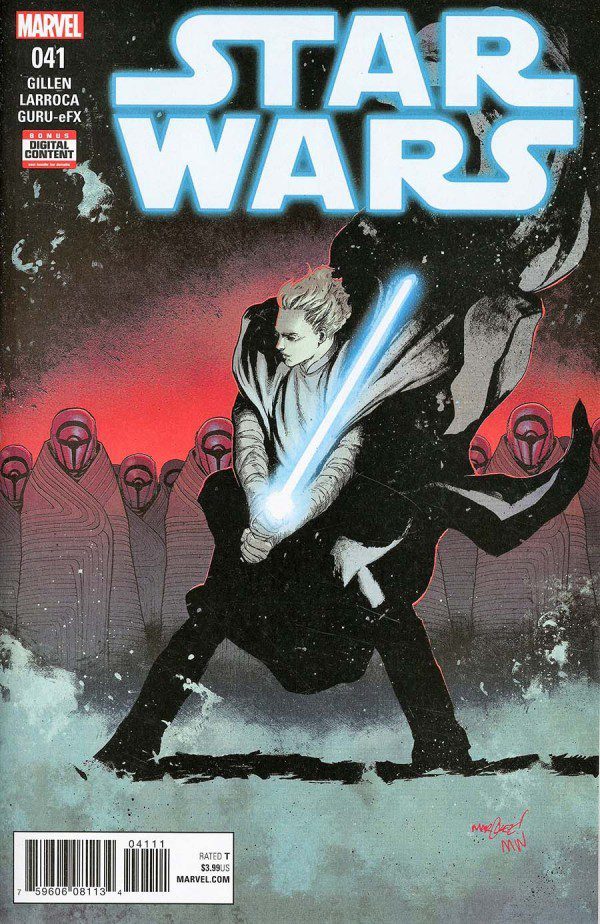 Star Wars #41 is a beautiful book to look at, but a disappointing book to read. Salvador Larroca’s artwork continues to impress and delivers cinema spectacle through the skyscapes of the dying planet Jedha. Unfortunately, writer Kieron Gillen’s pacing of the story is dragging this issue down. This pacing may be acceptable in a collected volume, but as a stand-alone issue, it is hard to recommend.

In the last issue, readers learned that Queen Trios, a character from the Marvel Star Wars and Darth Vader comics, has a giant machine to mine kyber crystals on the planet. In this issue, readers learn is that it is considered a “continent class” machine that not surprisingly is resistant to small explosives. For longtime Star Wars EU fans, this continent size machine recalls similar plot devices by Kevin J. Anderson in the Jedi Academy series who created giant vehicles to lay siege to a planet. While this does fit into the Empire’s pattern of giant machines that eventually blow up, that only makes the plot feel less inspired. Gillen does little with the narrative to make this stand out from similar plot devices.

There are five or so panels in this 21 page issue that do anything to move the story forward. Three panels that have lore implications deal with Luke and the Jedi cultists of Jedha. They tell him the planet has something to teach him and Luke sees the pain of the destroyed planet and the pull of the dark side. He realizes that if he is too eager to become a Jedi, his haste may cause him to fall to the dark side. Luke tells himself he needs to be patient. And thus, readers have some explanation of how Luke remains the Rebel fighter he is at the start of ESB. The potential conflict of purpose that Gillen set up last issue between Luke and Leia is quickly resolved in a few panels as Luke gives up and goes back to Leia.

Gillen does use another panel to nicely mirror some of Leia’s statements in TLJ. Han and Leia tell a Partisan fighter who tried a suicide run that individuals are worth more than heroic sacrifices and that they can only save the galaxy by being alive to fight for it. This parallels Leia’s statements to Poe and provides a meaningful tie into Leia’s character. Unfortunately, these interactions are only a few panels of a 21 page issue.

Have you seen this:
Blue and Gold #1 (REVIEW)

Five panels of meaningful story, a worn out plot device, and pacing slower than the continent class machine creates a disappointing filler chapter in this story arc. Even Larroca’s beautiful artwork cannot save this issue from the dark side.