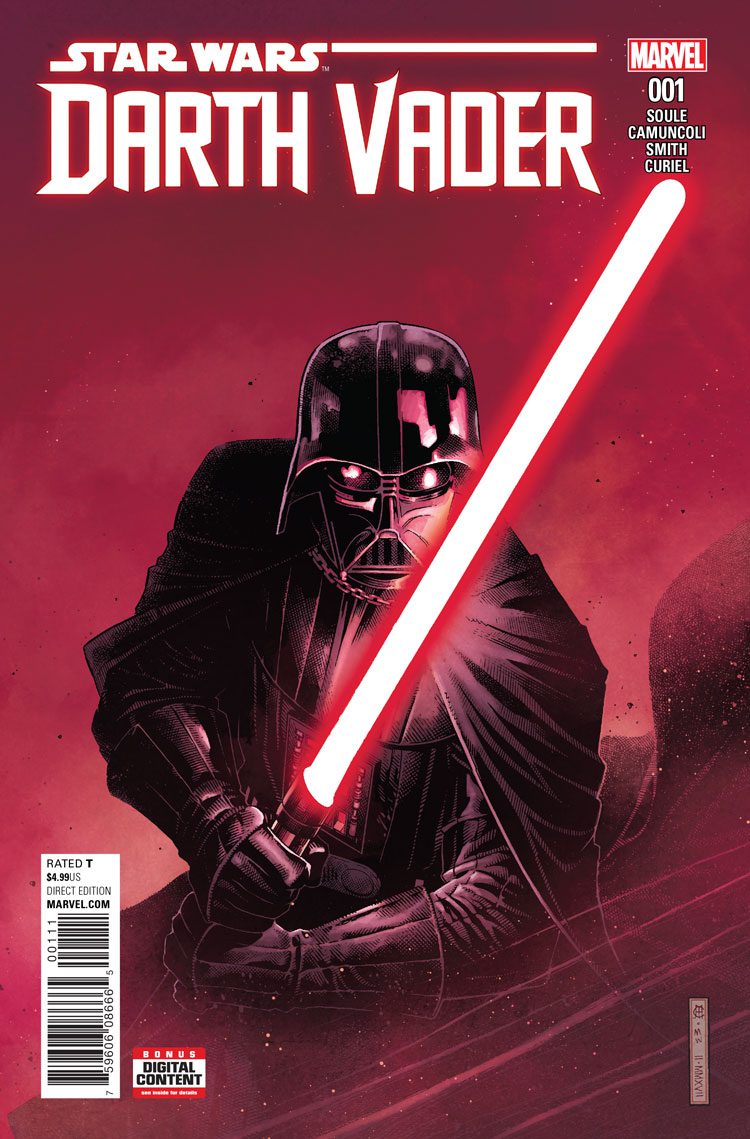 After his defeat at Mustafar, Anakin has awoken immediately after the events of Revenge of the Sith. But he is no longer whole. He has been encased in the armor that will be his personal prison for the rest of his natural life.

The comics resumed the storyline after he moaned and shouted his, much berated, “NOOO” line. Vader then picked up Palpatine with the Force and hurled him across the room just like one of the medical droids tending to his recovery.

His master was most displeased.

To begin, the dialogue here was brilliant. The comics conveyed a banter that far surpassed any of the screenwriting for the Revenge of the Sith film. Darth Sidious told his apprentice, “Padme…is DEAD my friend. Even the power of the DARK SIDE cannot bring her back. But in her death, she has given you a gift.”

Palpatine told Vader he may accept the gift and use it to become stronger or die in mourning. Vader chooses to live. Then Darth Sidious provided a practical demonstration of his superior mastery of the Dark Side. He unleashed his Force lightning upon Vader. His body is now a mechanical conductor. It only intensified the lightning strikes.

Palpatine made it clear to Vader that he will never, ever, touch him with the Force in anger again. It’s what I imagine will be the first of many demonstrations of Sith superiority. The relationship between a Master and Apprentice is obviously complicated. They are simultaneously friends and foes. The Apprentice must learn from the Master while the Master is careful in what they teach and when. If they teach too much too quickly, the Apprentice may feel the Master has outlived his/her usefulness.

At this point Palpatine appeared to be playing the role of friend and advisor as he did to Anakin in Episode III. Now, however, he showed the first small break in his decorum. He showed the first glimpses of his true face which Anakin will soon come to see in full. Palpatine ignited his red saber; the same lightsaber he used to defeat Yoda. Only this time it’s at Vader’s metal throat.

He asked Vader, “Where is your lightsaber?” 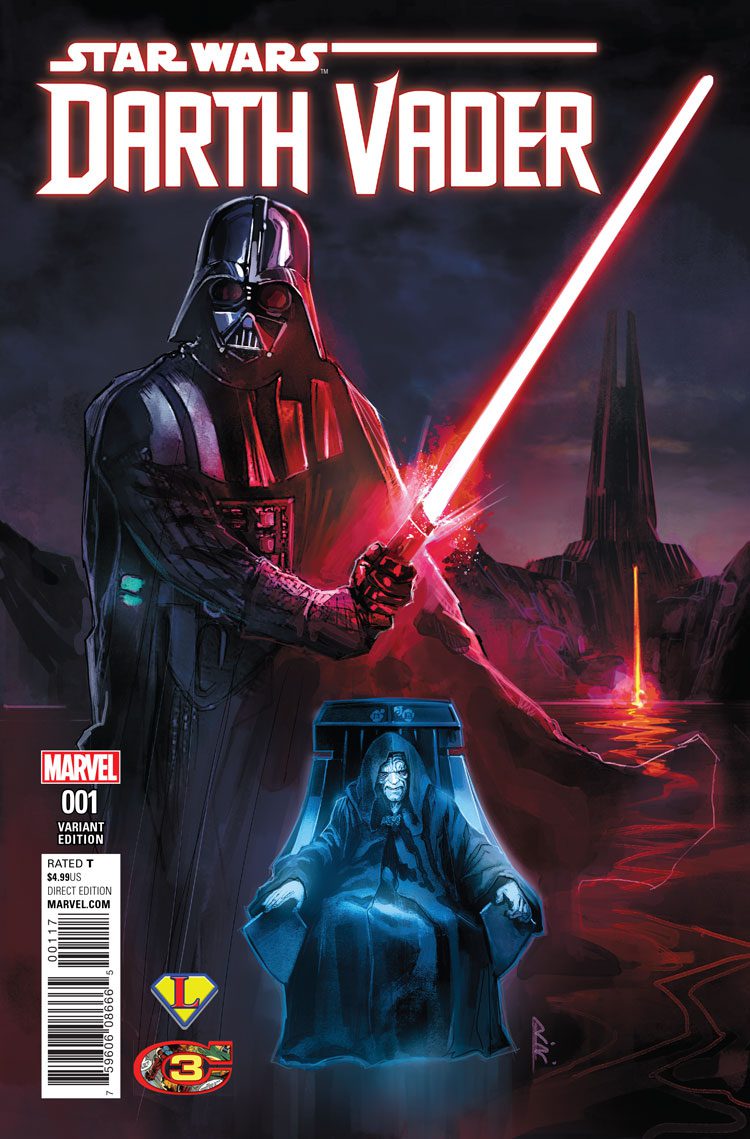 Of course, Vader lost his Jedi saber on Mustafar during his crippling duel with Obi-Wan Kenobi. He is without the traditional weapon of the Jedi or their counterparts the Sith. The origins of Vader’s red lightsaber will be explored much to the excitement of many fans, and saber fans like myself.

Meanwhile, at the foot of the former Jedi Temple the new banners for the Empire had already been erected. Their red and black motifs were clearly meant to harken back to the rise of the Third Reich in Germany. The Jedi are being blamed as the scapegoats for the entire Clone Wars and the assassination attempt on Dear Leader Sheev Palpatine.

Then comes the most controversial moment of this issue. Palpatine stated that Sith lightsabers are defined by their red, no, blood shine colored blades. In the past, this was explained as the crystals being synthesized as opposed to the organic crystals employed by the Jedi Order. I found that to be a satisfying explanation. It explained the Jedi’s attempt to work in harmony with the Living Force. The Sith, however, attempted to use the Force to exert their own will upon the galaxy. This, above all else, was the nature of the Dark Side.

In the Book of Sith section on Lightsaber Construction, read:

“The Jedi also carry lightsabers. They harvest their lightsaber crystals from a mine. The Sith, however, have long had a superior alternative. Raw elements cooked in a brood furnace will produce an artificial crystal- one that can generate an energy blade that will burn with a bright crimson light.”

After the Ahsoka novel, however, the canon changed. We learned that a Kyber crystal’s color can be influenced by the Force affiliation of the wielder. Palpatine stated in the issue that, “As you know, the Kybers are alive, in their way. Like any living thing, they can feel pain…Through the Dark Side you must pour your pain into the crystal. And when, at last, the agony becomes more than it can stand…a beautiful crimson. The color of your rage.”

Fans of the Clone Wars cartoon may recall the episode, The Gathering.  It featured young Jedi Padawans sent to harvest Kyber crystals from the ice caves of the frozen planet Illum. The process was a coming of age for all Force users. We have known since the Original Trilogy that constructing a Lightsaber was very important for a Jedi. Vader said so himself when he told Luke that his, “skills were complete” when he examined his son’s emerald blade.

Now, Vader is going on the equivalent of a Sith Gathering. Vader remarked that Palpatine could have given him any one of the lightsabers of the fallen Jedi. Including the one that belonged to Master Yoda. However, the lightsabers were all gathered and incinerated. Vader understood the reason. He said, “The saber of a Sith is not given. It is taken.”

Then Palpatine sent Vader on a mission. He said he has many plans for the Dark Lord but first, he will need his lightsaber. This struck me as odd that Palpatine would send Vader to take a crystal from a Jedi. He had just slaughtered an entire Temple full of the space wizards! One of his most prominent victims that came to my mind was Cin Drallig. Drallig (played by Nic Gilliard the movie’s fencing master) was the lightsaber instructor for all the Jedi. He was nicknamed “The Troll” by members of the Jedi Order and had been a highly respected Master for years by the time of Episode III. 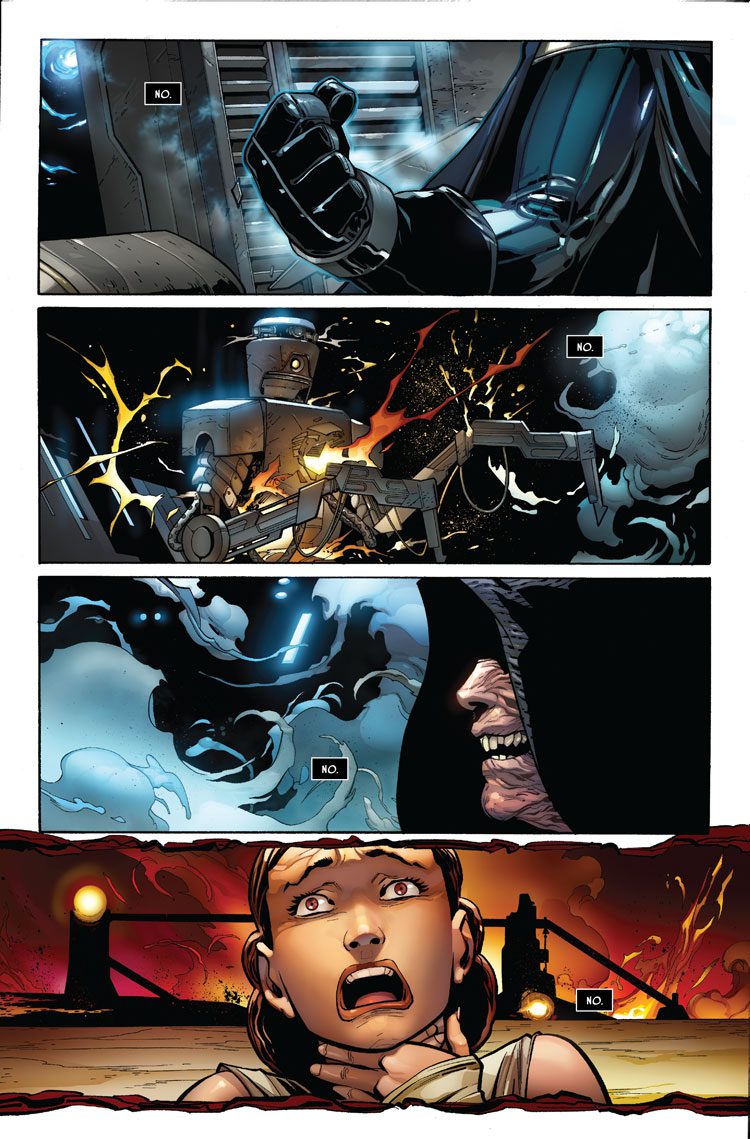 The newly minted Darth Vader cut him down during the raid on the Temple. This would seem, to me, like it would fit the requirement that the saber is taken. Drallig certainly didn’t give it up to Vader willingly.

On that note, have all the Sith been taking the Jedi’s Khyber crystals since Darth Bane began the Rule of Two? The Sith were believed to be extinct for millennia by the time Maul revealed himself on Tatooine. I would think the Order might notice that Jedi were periodically coming up dead/missing and all had their lightsaber crystals taken.

This also raised the question of who Palpatine took his crystals from.

Vader ended the issue on a planet in search of, what I assumed to be, a surviving Jedi. He had no lightsaber but the Force is still with him. He’s also not used to his armor yet. The Legends novel of “Dark Lord” took place during this exact same period of time. In the novel, Vader mentioned the agony and frustration in getting used to the armor. He acknowledged he was much weaker than he had been before, though by the end of the story he regained full use of the Force, if not his mobility.

This story may or may not have the same learning curve. In the comic Vader told the Emperor he found his armor to be “adequate”. However, we all know that Vader is a tech geek at heart. I imagine he will be working and tweaking on himself just like a Starfighter or pod racer. Most likely for the rest of his life.

As I neared the end of the issue, the burning question in my mind was: “Which Jedi will he encounter on this planet?” It would have to be a survivor of the recent Order 66. Some have suggested Mace Windu actually survived his fall out the window of Palpatine’s office the night Anakin became Vader. If so, that would be a true challenge to Vader, especially after his traumatic ordeal on Mustafar.

I’m going to place a bet that the Jedi Vader is going to meet is one that we’ve seen die many times. The death, however, has never managed to stick. The Jedi Master Shaak Ti was originally set to die at the many hands of General Grievous in Episode III. Her scenes were cut. She was then placed in The Force Unleashed video game as a boss for Starkiller to hunt down and kill. Now the game has been clearly labeled as Legends and Shaak Ti may live again. She would be a test to the new Dark Lord’s skills. She was known as one of the wildest, unpredictable, and skilled Jedi of the Order. She’s also overdue for a death.

The issue ended with Vader finding the thieves that stole his custom Starfighter. The craft looked like the Jedi Starfighters from Episode III but I imagine they will be rechristened shortly. These ship thieves truly picked the wrong pilot to jack that day, as Vader began to unleash the full fury of the Force upon them and left us all highly anticipating the next issue in the search for his red saber.

What did you think about Darth Vader #1? Tweet me your thoughts @JSandlinWriter and check me out at www.JaySandlinWriter.com.

My book, Outbreak Mutiny: Alternate History. With Superheroes. Is available on Amazon now: