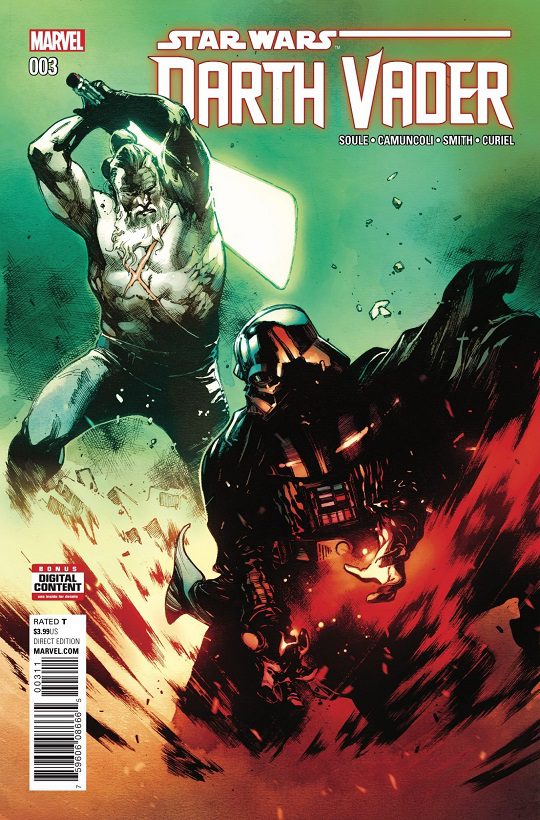 Darth Vader continued his quest for a Kyber crystal as the Sith Apprentice arrived on the river moon of Al-doleen only a few days after the events of Episode III. Last issue, Vader searched the archives of a Jedi outpost and found information on a lost master known as Kirak Infil’a. Infil’a had taken a vow known as the Borash to remove himself from the Jedi Order no matter the circumstances- including its own destruction.

This was lucky for Vader as the Emperor required him to take a crystal for his future red-bladed lightsaber from a living Jedi. This issue provided us the first look into Infil’a’s certain point of view as he dueled with a training droid that had served the Jedi for many generations. I enjoyed a bit of insight into a character that, if the events of A New Hope are to be believed, will surely die. I loved the character design for Infil’a and in my last review, I called him the Jedi version of Pai-Mei.

This issue confirmed that writer Charles Soule may have had that comparison in mind. Infil’a required Vader to climb many steps to the summit of a mountain to meet him in combat. It did not feel like an imitation or even an homage to the Kill Bill character but it may have been a subtle influence in his decision to create this new type of Jedi on an extended leave from the Order.

Ever since the latest trailers for The Last Jedi debuted the entire Internet has been railing about Gray Jedi. I’m so tired of it. People love the idea of a Force-user that’s “too cool” to be Jedi or Sith. It’s like everyone wants Luke to build an order of Holden Caufield’s with lightsabers.

Have you seen this:
Change My Mind #108: WandaVision Exit Survey 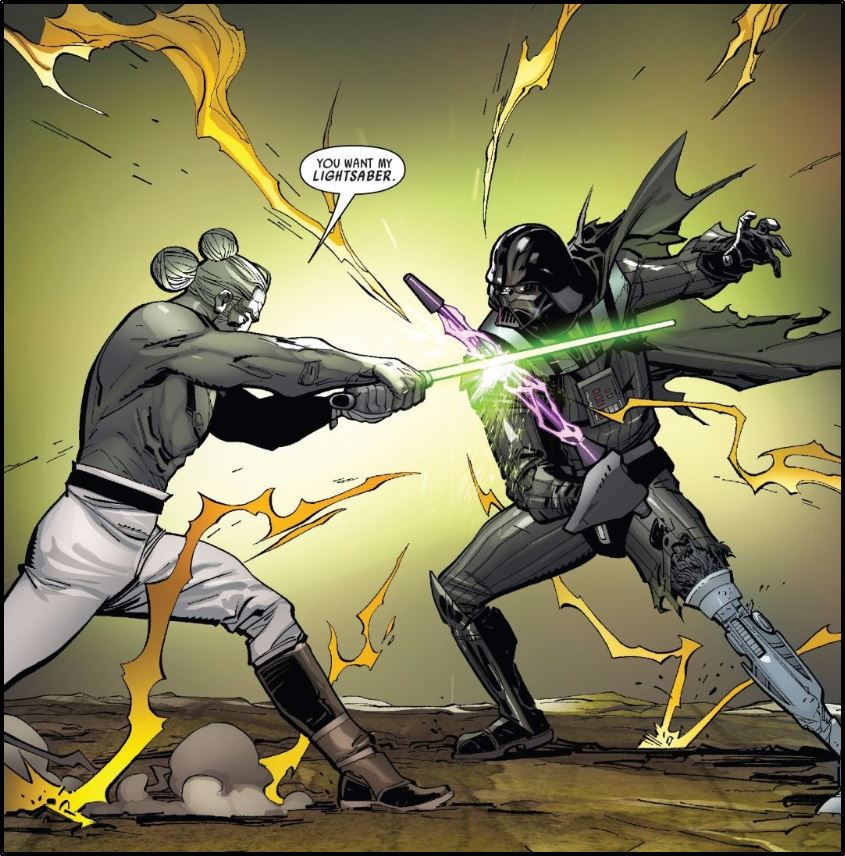 I don’t personally like the idea of Gray Jedi and any references to them so far have been fan-based. But I must admit that Master Infil’a is the closest thing we have seen so far. He lived a monastic life years before the Clone Wars after becoming a hermit. It’s hinted this vow was based on some sort of past sins that he needed to leave to atone for.

“For my transgressions I took the Barash vow, to live alone inside the Force, until my true path as a Jedi became clear.”- Master Infil’a

All we knew about him before was that his sole purpose was to fight. He may have occupied the role of battlemaster or lightsaber instructor in the temple prior to Cin Drallig. This character has a backstory that I believe is screaming to be revealed in future comics or books. In Issue #3 he not only proved his skill with a lightsaber but his adept usage of the Force. He’s had years to prepare himself mentally and physically for this climactic battle with the darkness.

Vader, on the other mechanical hand, is not at his peak mentally or physically. Personally, I was surprised Vader was able to function as well as he did in the previous issue in his onslaught against the Clone Trooper veterans. He hasn’t had any time to adapt to his new mechanical parts and now he’s being thrust into battle with a hardened Jedi Master whose sole occupation has been training for combat. 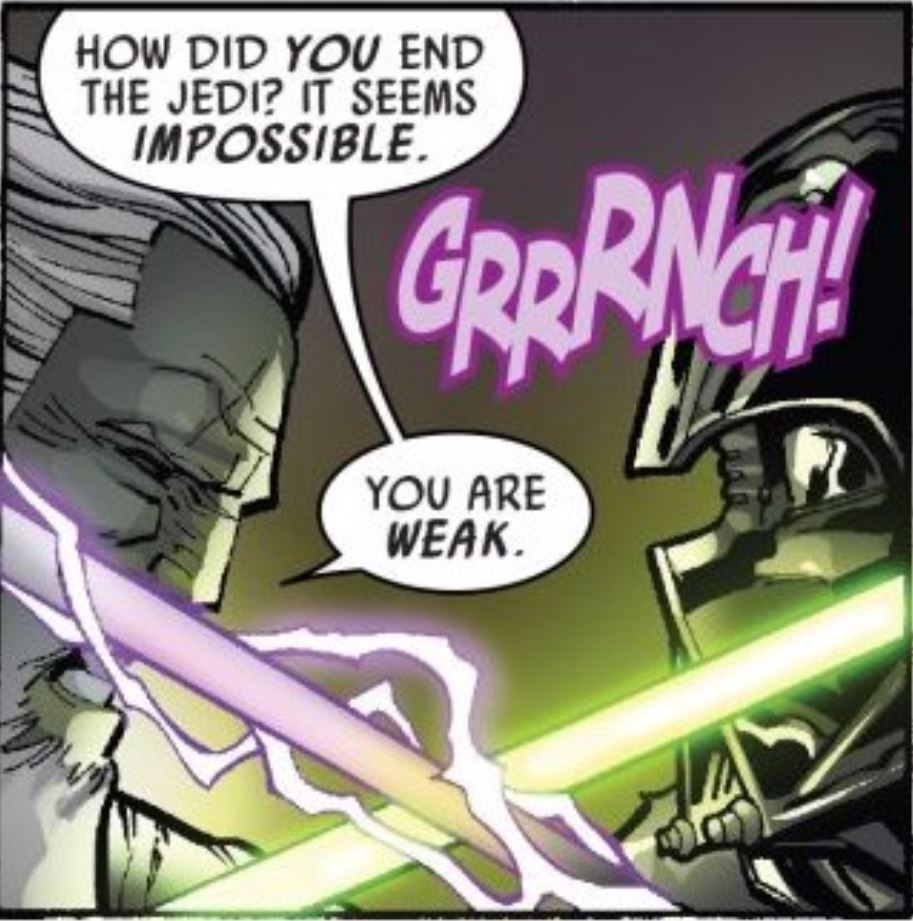 Many of the Darth Vader books have been criticized as having a “Superman Syndrome” by depicting the iconic villain as invincible. Here, for once, he’s clearly the underdog and the odds are not in Darth Vader’s favor. That’s easy to believe because he’s at the lowest point in his life. Mentally, he just suffered the loss of his pregnant wife and went through his traumatic disfigurement at the hands of Obi-Wan on Mustafar.

It’s shaping up to be a very bad month for the former Chosen-One.

If the end of the issue is any indication, things are about to get a lot worse. In his current state, Vader found he was simply no match for the Borash Bad-Ass. To put it bluntly, Infil’a turned him into a one-legged Sith in an ass-kicking contest. After a brief engagement that he appeared to have no chance of winning, he was thrust into the depths of the mountain range. Infil’a vowed to travel and find Vader’s Master and restore the light of the Jedi to the galaxy. Hopefully, this line will silence any Gray Jedi fans, but I doubt it.

In the next issue, Vader will have to regroup and find a way to defeat Infil’a and take his crystal for his own Sith saber. I’m very interested in how Soule plans for Vader to find the Force again to aid him in this battle, especially with no lightsaber and now only one leg. There was a handy droid nearby so I imagine, with the prodigious engineering skills of Anakin Skywalker, he will be able to fashion some new parts for himself and continue on as a Dark Side MacGyver.

He’s good at fixing things, always was. But how will he fix himself and secure a new lightsaber? I can’t wait to find out as this exciting storyline continues in Issue #4! Available: August. 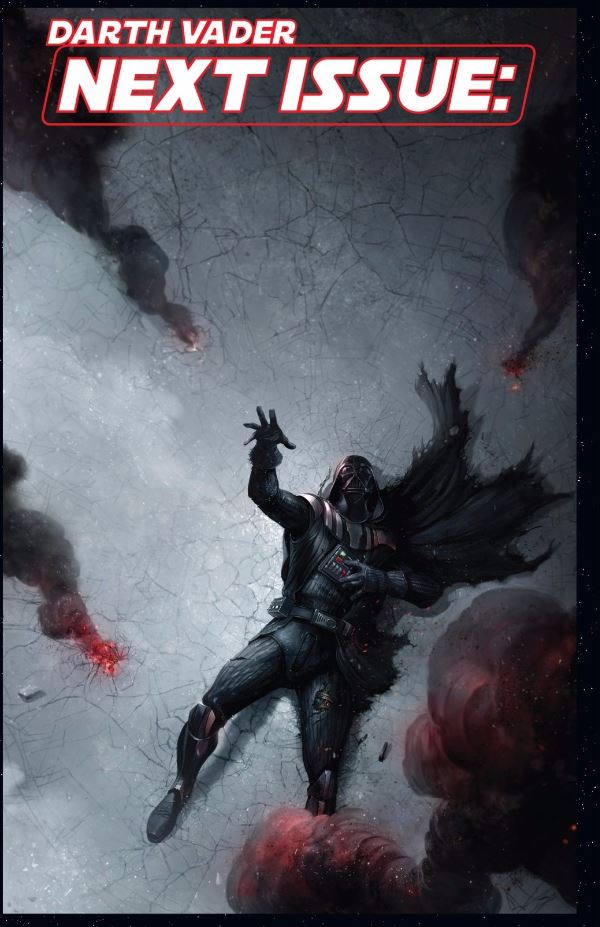 Find me on twitter @JSandlinWriter. Check out my book: OUTBREAK MUTINY. Alternate History. With Superheroes. On AMAZON: http://amzn.to/2tKfSxD