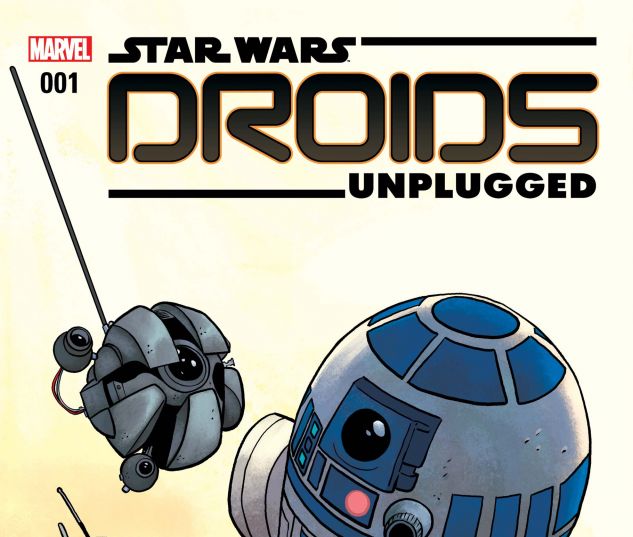 In the SW Galaxy, even the microwave ovens have hearts of silicon.

Today’s new release Droids Unplugged #1 was a charming romp through the lighter side of the galaxy far, far away. It focused on its most underappreciated members: droids.

This issue collected three short stories taking place in all the trilogies with the focus on different droids. I admit I was initially disappointed. When I first heard the title I had hoped for a solo series featuring BeeTee and Triple Zero going on a rampage of mechanized carnage and destruction. What I got was more like an edition of Family Circus with astromechs.

We began with the weakest story of the collection, “Probe Droid Problem” taking place during the events of Episode I: The Phantom Menace. Maul was on the hunt on planet Tatooine and had released his DRK-1 locator droids from his vessel the Scimitar. The Sith droid happened to find another droid buried under a set of rubble. I did like the cameos of the Jawa scavengers trying to pick up the two droids. It didn’t work out well for the robed scavengers when the probe droid escaped and blew a hole in the side of the Sandcrawler. That would definitely hurt the resale value! I tuned out most of this adventure but enjoyed the short, happy, ending when the Sith droid decided to stay on Tatooine with its new friend. 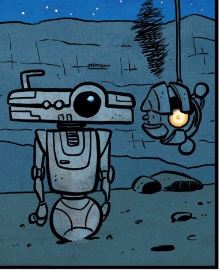 I was about to bail on the issue when the headline for the next story caught my eye. Droid Dilemma was dedicated to the memory of Kenny Baker. Baker was, of course, the legendary actor who operated the insides of Artoo in the films. He passed away in August of 2016.

This story was just as lighthearted as the first but it pulled me into the book because it focused on a droid I actually cared about. In the previous story, I had to look up the name of Maul’s probe droid and I didn’t bother to check the designation of the friend it made.

In this short story, we began with the iconic Falcon outside a temporary rebel base on Reamma in the Outer Rim. Leia and Luke are speaking about a missing cargo vessel carrying vital medical supplies. The art in this issue is quaint and reminded me of a Sunday comic strip in the style of Foxtrot or Calvin & Hobbes. It was different but fun to see Leia in her iconic Hoth Soldier outfit from ESB and Luke in his gold jacket from ANH drawn like a pair of characters from the newspaper funnies.

Not much happened in the story and it wouldn’t have worked with anyone else but Artoo. It also helped to picture the late Baker inside the suit acting out all the Laurel and Hardy style antics as Artoo tried his best to do his job while running into other droids that got in his way.

The issue ended with a great image of Artoo performing the droid equivalent of a face-palm and wondering why he even bothered to make such an effort for a scrubbed mission. The last image would make an excellent poster or even a tattoo for a Star Wars fanatic.

The third installment in this trilogy took home the mechanical cake with a story set in the Sequel Trilogy Era that featured BB8. SaBBotarge had the same comic strip style artwork of the last stories that I had come to appreciate by the end of the issue.

BB8 had a cute story in which he played matchmaker between a pilot and a tech working in the resistance. I loved the last panel where the tech kissed BB8 and thanked him for his help in meeting someone new and special that day. Perhaps the spherical savior could act as ring bearer for their wedding in a sequel. 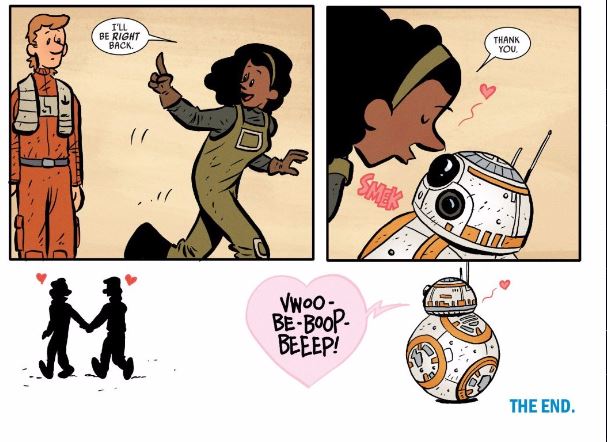 The stories were all simple, straightforward, and appropriate for all ages. There’s no fighting, death, or real danger for any of the characters. It was nice to see a look at the daily life in the rebellion and the resistance in the latter two stories. I may long for lightsaber duels and space combat but the Star Wars galaxy is a diverse place and there is room for this type of story as well.

I also enjoyed the idea that the droids had personalities and human characteristics. In the BB8 story, especially, the little soccer ball showed a great degree of empathy and a desire to see two organic meat bags find love.

For fun, family, entertainment for your children or a smile of nostalgia on the face of an older Star Wars fan, check out Droids Unplugged Issue #1.