The announcement of a NEW Star Wars trilogy made it clear to fans of the galaxy far, far away that these stories will outlive us all. Now that Disney has used the Sequel Trilogy to address the fate of the original characters, everyone is asking one HUGE question:

Luckily, the Star Wars canon and Legends history is FLOODING with existing premises for new Trilogy Ideas. Here is my TRILOGY of pitches for areas the next Star Wars movies could potentially cover: 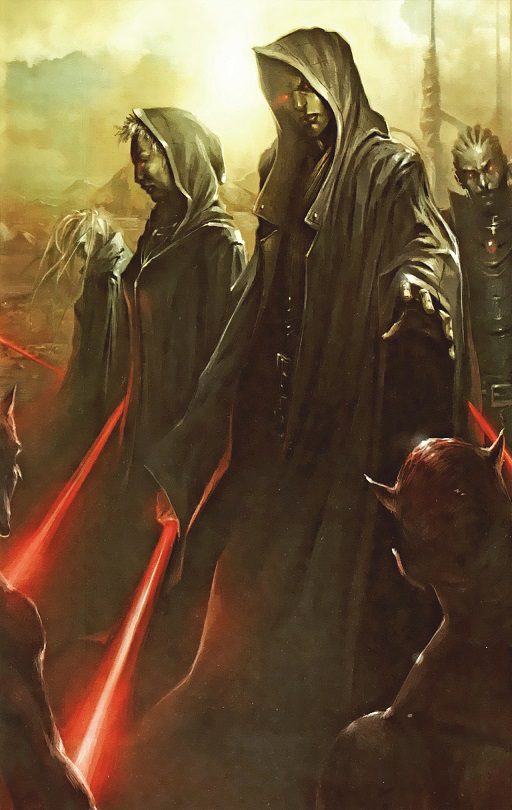 “Once we were brothers in the Force. But from the Hundred-Year Darkness were born the Sith.”- Unknown Jedi.

Obi-Wan Kenobi referred to the reign of the Empire as the “Dark Times” but they were a vacation compared to the first split within the Jedi Order. Thousands of years before the original films, the Jedi faced the first major schism when their unity fractured and rogue Jedi embraced the Dark Side.

The first Dark Jedi believed the true nature of the Force did not lay in knowledge and defense but by reshaping the galaxy to fit their will. They created terrible kaiju monsters known as Leviathans that could live indefinitely and would really make stunning visuals for the big screen. The schism resulted in the Dark Jedi cast out of the Republic and sentenced to exile in the Unknown Regions of space. The exiled Jedi ventured through the uncharted territories before discovering the aboriginal Sith species.

On the Sith homeworld, the Dark Jedi set themselves up as gods over the primitive and brutal Sith species. Exiled Jedi Masters like Ajunta Pall, Xoxaan, Sorzus Syn, and Remulus Dreypa, arrived on Moraband and became the founding Dark Lords of the Sith. They formed an Empire based on the Dark Side and built a civilization. But in their hearts, they never forgot the Jedi and planted the seeds to return and take back the Core Worlds.

The society they founded would eventually become the Sith Empire and they would gather their power generations. Eventually, the Sith attacked the Republic again from out of nowhere and began the Great Hyperspace War. The Republic was nearly toppled in the struggle!

These films could be special in that each installment could take place hundreds or thousands of years apart instead of picking up right after one another like Episode VIII is rumored to do with Rey and Luke training.

2. Knights of the Old Republic

“Savior, conqueror, hero, villain. You are all things, Revan… and yet you are nothing. In the end, you belong to neither the light nor the darkness. You will forever stand alone.” 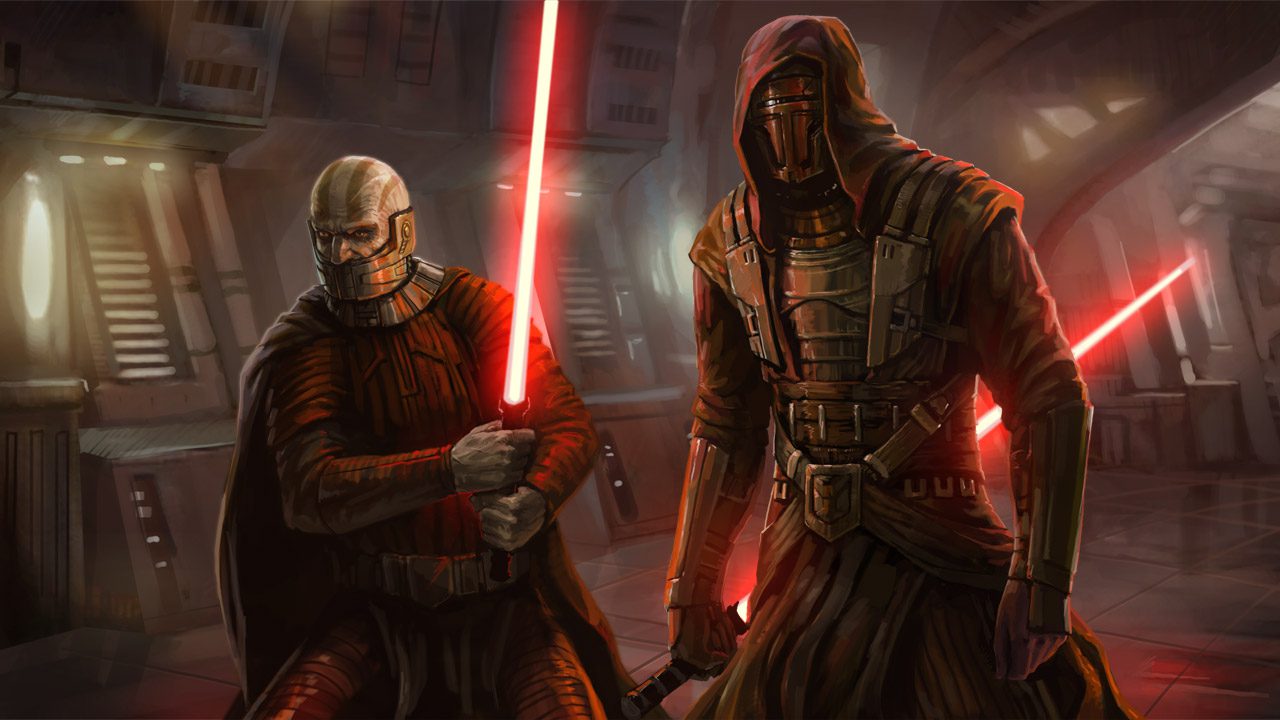 They say only a Sith deals in absolutes, but I am going to make a statement that Knights of the Old Republic is the most popular era of the Star Wars saga not featured in live action. The original role-playing game was a huge hit in 2003 for the Xbox. Like the Hundred-Year Darkness, it was set thousands of years before the first films, four-thousand to be exact. Setting a trilogy long before the events of the original films would allow filmmakers and writers far more freedom to play with events in the galaxy and develop new characters instead of having to rely on established ones.

In this case, they have an amazing opportunity to feature a trilogy about Revan: the Prodigal Knight.

Like Anakin Skywalker, Revan was extremely powerful in the Force and mastered both the Dark and Light sides. Revan was a Jedi who rejected the Order’s decision not to intervene in the Mandalorian Wars raging across the galaxy at the time. He took a group of Jedi into battle against orders and led the Republic to Victory.

After the war ended, Revan and his apprentice Malak, traveled into the Unknown Regions to seek what truly caused the war. Much to his dismay, he discovered the remnants of the original Sith Empire. Eventually, Revan would return to attack the Republic with his own Sith Order, but his intentions were far more complex.

This trilogy could be the story of Revan trying to destroy and remake the Republic and Jedi in order to prepare it for a greater threat!

The games were famous for allowing players to choose Revan’s gender, morality alignment, and make decisions that would shape the galaxy. The downside to a trilogy would be that Revan’s character could not be as open-ended. The later books, games, and comics about Revan had the same problem. This may diminish some of the appeal for longtime fans who already had their own ideas about Revan.

Even if it’s not the choice for a new Trilogy, I feel it’s only a matter of time before the KOTOR era is featured prominently in the new Star Wars Disney canon. The Lucasfilm office loves these games and even used their Hammerhead Corvette ships in Rogue One and Star Wars: Rebels. Revan was all set to debut as a spirit in The Clone Wars TV series before George Lucas himself nixed his inclusion. Now that Lucas has lost his power over decision-making, there is nothing keeping Revan from appearing on the big screen.

“Two there should be; no more, no less. One to embody the power, the other to crave it.” 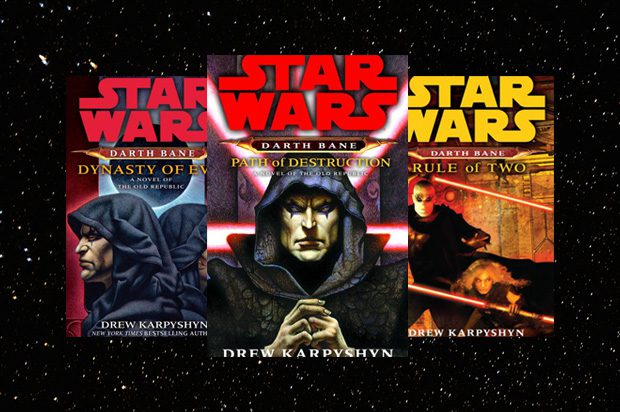 Darth Bane was the creator of the Rule of Two and began the incarnation of the Sith Order that eventually took over the Galaxy in the prequel trilogy. Darth Bane himself appeared as a Force illusion in The Clone Wars series where none other than Mark Hamill voiced him. 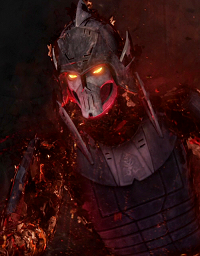 Like the other choices on my list, this potential Trilogy takes place long before the original movies. However, it has the closest connection. The consequences of a Bane trilogy would lead directly to the prequels because Palpatine was the fulfillment of the grand plan Bane enacted to destroy the Jedi. In that sense, this may be the best choice of all because a Bane trilogy could redeem the prequel trilogy by helping us see what a complex story George Lucas envisioned when he came up with Palpatine and the Sith.

The guide for a Darth Bane trilogy of movies already exists with the incredible book trilogy by Drew Karpyshyn (@DrewKarpyshyn). His books could serve as a guide for the films. The first book took place in the middle of a war with the Jedi and the Sith Order. This was a time when the Sith and Jedi were both many in number, unlike the prequel and Original Trilogies. Bane was the Sith who famously decided that the Dark Side was like venom; if it was poured into too many vessels it would become diluted. Therefore, he created the Rule of Two and decided the Sith would live in hiding.

Bane’s Rule of Two survived for a thousand years until Palpatine’s apprentice, Maul, revealed himself to the Jedi in Episode I. This trilogy would make Maul’s dialogue in the hated film carry so much more weight. The Phantom Menace may be viewed in a better light after it’s revealed the events were the culmination of a millennia of planning. It would also explain the Jedi’s shock when the Sith resurfaced in the prequels. Ki-Adi-Mundi said that the Sith had been extinct for a millennium, and these films would depict what led to their supposed extinction a thousand years before. It may also explain how Yoda and the Jedi Order even KNEW about the Rule of Two in Episode I when its whole purpose was to remain hidden from the Jedi!

So what do YOU think the next Star Wars Trilogy should be? What era from other stories would you like to see a film trilogy cover? There’s still so much more! Sound off to me @JSandlinWriter on twitter and let’s talk about it!

Check out the Darth Bane Book trilogy by @DrewKarpyshyn here on Amazon: https://www.amazon.com/Darth-Bane-Legends-Destruction-Dynasty-ebook/dp/B009MYAQQS