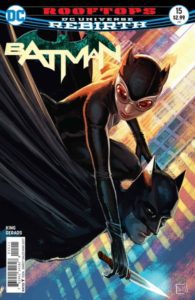 Batman and Catwoman are back to finish the “Rooftops” mini-arc in Batman #15, and if you liked what we saw last time you’ll love this one, with the caveat that you’ll need to get used to the idea of this story being put on the back burner for an undefined amount of time. Cliffhangers are an industry staple, but as a fan of these two characters coming together, I wasn’t quite ready to see them part just yet.

One of the best parts of getting a new author with his or her own intentions for characters is seeing them come to fruition, finding out where each new 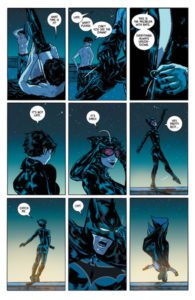 scribe stands with certain relationships. King has come into Batman and announced quite clearly with these last two issues, with regard to shipping BatCat, it’s complicated, but not nearly as much as we are used to. His writing is flirtatious, even when the story goes down a different route. He also doesn’t mince words between the will-they-won’t-they pair. Bruce and Selina speak in no uncertain terms regarding their feelings. Rarely does Batman succumb to such language, and it’s refreshing to see King is bringing that back. With Selina in his company, Bruce is able to let down his guard more than with almost anyone else.

Have you seen this:
Suicide Squad #1 (PREVIEW)

Gerads’ art returns to the cool blue everything we saw last time, with notable and effective exceptions for a few scenes. It’s a great fit, though I’m guessing the new arc in two weeks is bringing with it a new artist again. Along with that great color pallette is what those panels are depicting, which, in the early pages, is a great nod to the Batman comics of old. It’s something long time fans will really appreciate, but it doesn’t lose its effect if you’re not in the camp either, so it’s even better as it works for everyone.

There’s so much more I want to see between these two characters and I would do a multi-arc love story just between them, villains need not be involved. This issue ends with a seemingly temporary goodbye to this story with the setup for what could be another quality arc on the way. And yet, just like the man in the cape and cowl, I’m really just looking for more of Catwoman.