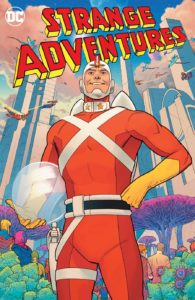 Following up a massively successful run on Mister Miracle, the creative teams reunite for an Adam Strange comic. When thinking about who Adam Strange is, many people will have no idea about who he is and why his story was being written. Being a fan of King and Gerads work, this is perfect for them. All positive notes aside, the main question is if their first issue can be considered a success or not.

We are introduced to Adam Strange at a book signing for his autobiography and then some press tours, flashbacks on Rann fighting the Pykkts and his current life on Earth. Establishing the basics helps build the character. This is the strength of the issue as we see who the War Hero of Rann is really like. 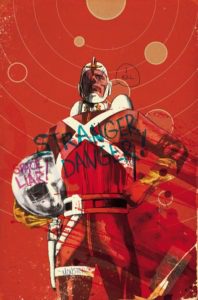 King has a quality for writing little known characters. It’s not at the level of Geoff Johns, but it is close. This issue allows us to understand who Adam Strange is without long winded narratives explaining his back story. This approach keeps the story fresh and allows for things to reveal themselves in a natural way.

Gerads style of art fits perfectly with the story. Going from different points in time is not an easy task. Making it all work together and having to stick to a consistent pace is not easy. His style in Strange looks and feels cleaner and brighter compared to the darker tones in Mister Miracle. The other stand out feature is the emotional range his characters show.

The issue is strong and is off to a great start. The hardest part for most readers is not comparing it to Mister Miracle. Considering its the same creative team and a little used character it seems like a daunting task. One that is too soon to tell.

Have you seen this:
Soul (Review)
DC comics strange adventuers