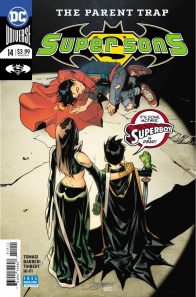 Lois Lane is running down a story in Gotham City when she gets a call from her son Jon. Damian tells his partner to keep her talking because they are in pursuit.

What the reporter doesn’t know is that she is being hunted and her son and his friend might be the only ones who can stop the killer sent after her. What makes the situation even more ironic is that the assassin hunting Jon’s mom is Damian’s mother Talia Al Ghul. What the boys don’t know is that Talia has another purpose in hunting Lois and it has everything to do with seeing how much of an influence Bruce has over their son. After realizing that her shot has missed, she decides to hunt whoever stopped her and Damian confronts her with a kick to the face. 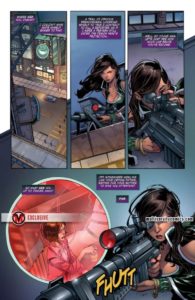 As the League of Assassins ninja’s go after Jon in the middle of the street, Damian and his mother trade blows and insults on top of a roof in Gotham. As Damian takes the advantage in his fight, Lois comes across her son taking out the ninjas and both play it awkwardly cool in front of the woman Lois is interviewing. Damian and his mother continue their battle and she learns more about the young man he is becoming while he decides to tell her how upset he is at both he and his father. It’s an interesting revelation that goes a long way towards explaining Damian’s attitude.

In a rare moment between Jon and Damian, there is an understanding that makes this series constantly worth reading. Tomasi has built an amazing dynamic between these characters and even in expanding their world in different issues, he doesn’t sacrifice their core relationship. The art was amazing in this issue as well and the details in the panels was worth going back over again.

Have you seen this:
Detective Comics #1024 Review