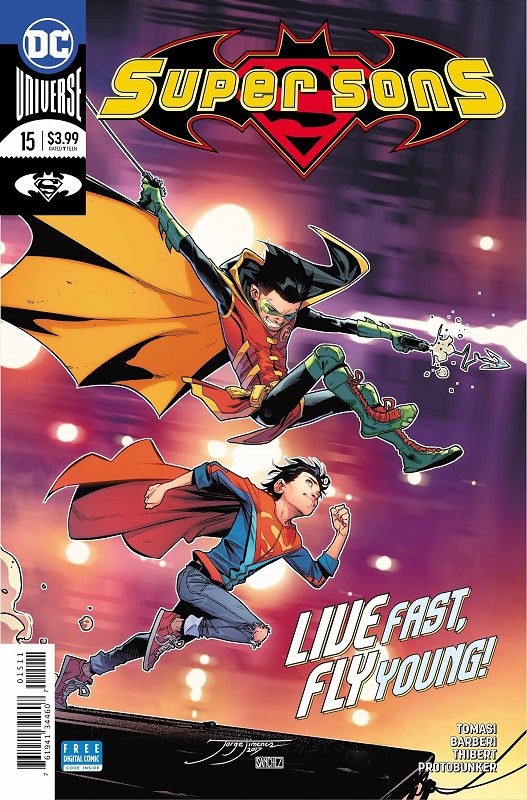 Robin and Superboy are hanging out at their underwater lair talking until they are attacked by Kid Amazo. First of all, can I just say how awesome an underwater base sounds in general? If I were a kid superhero, it would be underwater base and personal sub all day every day. As the base begins to flood, Jon forces Kid Amazo outside, giving Robin enough time to find some equipment to help them reach the surface. A task easier said than done when Kid Amazo has the powers of Aquaman.

I enjoy the fact that in the case of an emergency at the base, Batman dispatches Cyborg to rescue the boys. The moment gives Damian more humanity as he argues to be able to go back and search for Jon, who was dragged back under the water. Cyborg agrees and goes to help, but they might be too late. Kid Amazo as a villain has been pretty consistently written throughout this run and continues to be so. If Tomasi was shaping him to be a worthy adversary to Jon and Damian, he succeeded. While not the best overall villain, he is still good enough for these two heroes and his childlike ambitions work well in contrast to Superboy and Robin.

Tomasi’s writing is on point in this issue. Even though it moves a little fast towards the conclusion of the issue, it plays those action moments out well so the entire issue feels like it’s in motion. Barberi’s art is amazing. I love his use of lines as well as the details in the characters themselves. The whole issue is rich with vibrant colors and I appreciated it. The only thing about the issue I took issue with is that Kid Amazo is still a little lacking to me as a character. He makes a great villain for the Super Sons, but he still lacking something that would make him truly terrifying.