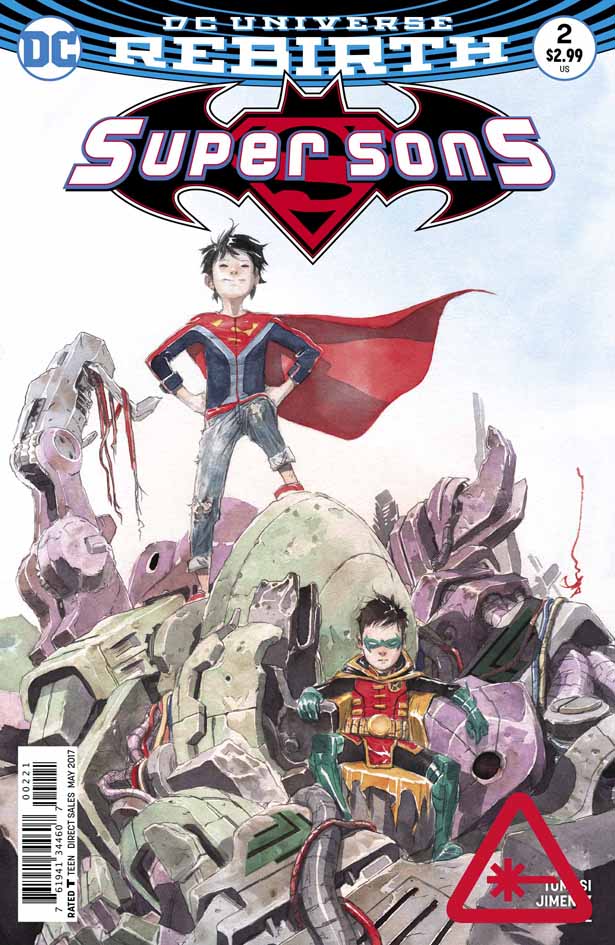 The prologue of both this issue and the first could be its own comic. The story is compelling and disturbing and I want to finally know who this psycho kid really is and how he’s going to affect the lives of Superboy and Robin. Speaking of the titular Super Sons, the boys have gotten themselves into a jam when their attempt to break into LexCorp summons Lex Luthor himself to confront them. Using Superboy as bait, Robin manages to break into the LexCorp facility. Lex manages to capture Superboy and confront Robin as to why he’s planting explosives in Lex’s private lab. As Lex thinks he has the upper hand, we are reminded how clever Damian Wayne really is. As the boys escape, Jonathan confronts Damian about how one-sided their partnership is. He’s dismissed by Damian, who reminds me what a little snot he is as well. 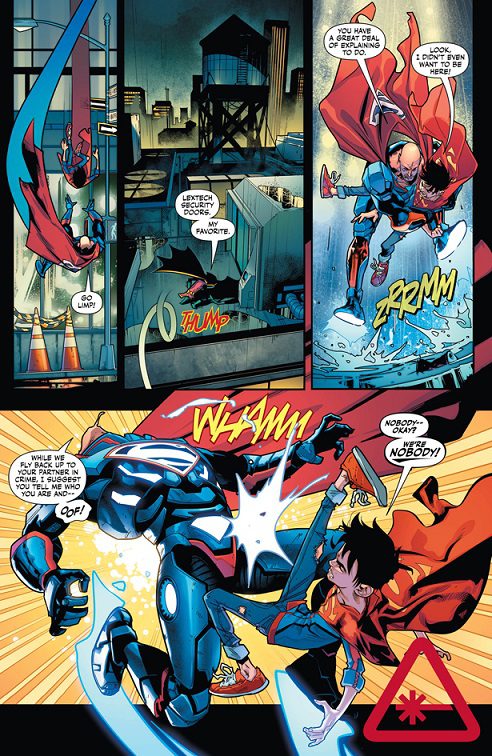 Turns out the information that Damian got from the LexCorp mainframe is about our mystery psycho child and his backstory starts to come to light as the Super Sons, reluctantly, decide to track him down. After finding out more about the young man, his family and their connection to the Amazo Virus, Robin and Superboy track down the last known location of the family and when Jon sees the carnage left over, he comes to a realization about the seriousness of what they’ve gotten themselves into. He decides to leave, violently shoving Damian out of his way. As Damian continues to investigate the crime scene and Jon comes across the lone survivor, there are ominous shadows about and those shadows do not look happy.

This second issue continues to build on the promise of the first. It is both kinetic in its action scenes and thoughtful in its exposition. None of the moments seem forced in this story so far and all of the interactions are satisfying. Peter J. Tomasi has really captured these two characters in this issue. It’s interesting seeing their dynamic develop because their relationship is far from friendly. There are moments when you wonder why these two would ever interact if not for the circumstances of their parentage, but when they do its honestly told. Jorge Jimenez’s art in this issue is stellar. The way he frames the action beats in the story give you a real sense of how both boys are not copies of their fathers, but almost extensions of them. Alejandro Sanchez’s colors really stand out in how bold and bright he makes them. I continue to be impressed with this series and can’t wait for the next issue.