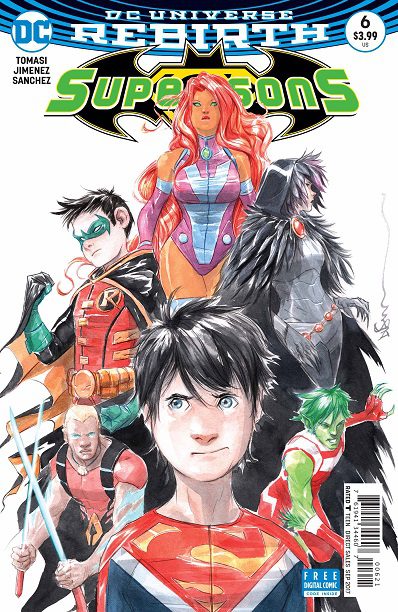 “Planet of the Capes Part 1”

Probably the creepiest opening to a comic I’ve witnessed recently, but the opening panels of this issue are interesting in both style and subject. The scene then shifts to the domestic as Jon is about to go on an outing as Superboy and has to deal with being a hero, while still being a kid who has rules. This was a sweet moment that you don’t often see in comics and something I have been enjoying in this series. When Jon finally meets up with Damian, he threw a curveball by the young hero; they’re about to start his training. 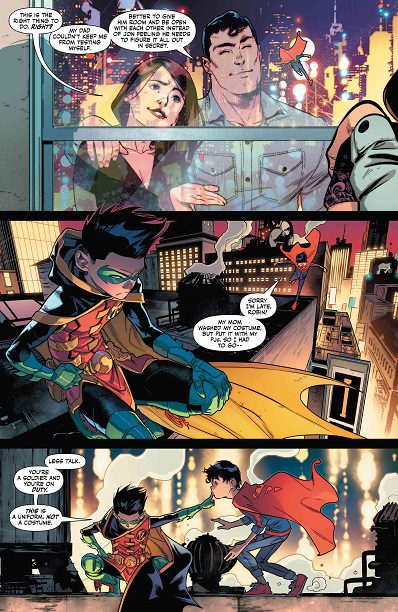 As both boys discuss their philosophies about crime while helping others, Damian is disturbed by the fact that he can’t seem to reach any one of the Titans. Suddenly, the team arrives and they aren’t there to shoot the breeze. They have a mission that requires Damian’s attention. Damian immediately abandons Jon and goes off with the Titans to track a threat somewhere in Metropolis. The team confronts the threat head on and it does not end well as this threat seems to be ready for them. As Jon sits at home watching TV and getting ready for bed, there is a knock at the terrace door and a surprise on the other side that promises a huge mystery to come.

Tomasi continues to create some really great dynamics between Damian and Jon. Unfortunately, there are some moments that seem regressive. After everything that the two of them have been through, it feels as if Damian has continued to marginalize Jon and his contributions while constantly seeking him out. Jimenez’s art continues to be a high point for this series that I consistently enjoy. He is able to deftly capture the visual fun of quiet moments as well as intense action scenes.