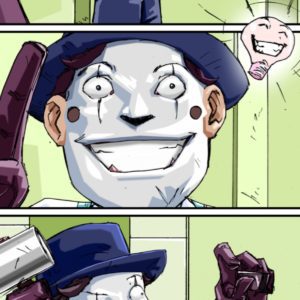 I’m very lucky to come across the folks I do on social media. Getting introduced to gems like this is fantastic. Lately, I’ve been reading a lot more independent comics. More so than the big 2. It’s because there are new universes being built and a whole new brand of heroes and villains. So many other genres to choose from as well. This comic, it’s most definitely an entirely different take on a hero. After reading the first few pages I already knew the book was going in a crazy direction. I love crazy! It has its share of sadness. It is Group Therapy.

This issue is all about a few of the characters, their powers, and their issues. There’s Ultra Transvestite- her powers are her name basically adding ass-kicker to it. Like he puts it the comic, super strong, but too desperate to be loved. I think she’s the only character I didn’t completely feel a strong 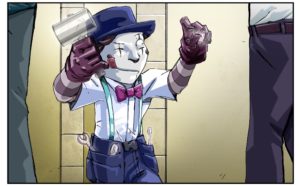 connection to. That’s the best way of wording it. Maybe it’s because not a lot of her character is revealed yet. I do look forward to seeing her kick ass though! The Annoying Mime, he’s, annoying. Actually, he’s the character who intrigues me the most. Next to Drunken Mall Santa. Yes, that’s his name! He’s obviously a Santa. Heavy got some serious alcohol issues and a very, very strange and unhealthy codependency issue with The Asshole. The insult comic who to me, seems to be so attached, it’s almost like he’s quite literally part of him. Drunken Mall Santa may be the saddest yet most hilarious character. Most of my favorite panels have him in them. I even began to analyze the Shrink during his therapy session. I pay close attention to detail and I love how much is put into it. The whole book. The art had me so sucked in I had to go back and reread parts of it due to distractions. I could see how well the creative team work together as a whole. There was no messy dialogue. It flowed almost flawlessly from panel to panel and the artist doesn’t miss a beat matching up. The expressions especially.

Have you seen this:
Detective Comics #1029 (Review)

Some of my favorite comic book issues are the ones that are setting up the characters. Allowing the readers to get to know them. Just another thing I loved about Super Support Group. These characters are all so unique. I can see exactly what the writer is trying to convey. The set up is fantastic. The ending has me pretty shocked and super excited! After all the build-up through the entire issue with the poor Annoying Mime, I got what I wanted! Not in the literal sense, but a huge climax and now I can’t wait for episode two!! As unique as these characters are, They’re all there for the same reason, even the ones who aren’t court mandated. They need to learn to control the weakness that comes with their powers. Not sure what the Drunken Santa can do sober, but I’m excited to find out. There’s a villain out there who’s committing crimes because he knows they won’t do anything about it. I hope group therapy really can work for these outcast supers.

Have you seen this:
Raya and the Last Dragon (Review)
Anomalous comics Arkhein Super Support Group