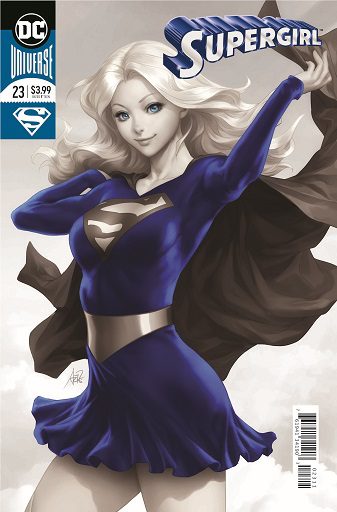 In part three of the “Killers of Krypton” Kara discovers just how far the rabbit hole goes in her quest to solve the murder of her homeworld; it’s this need to discover the truth that places her in direct odds with the Green Lantern Corp and Earth’s cosmic cops Kyle Rayner and John Stewart.

Supergirl has been searching for her niche within the Superman titles for a while now. The character has not had much of an impact since her death in Crisis on Infinite Earths; most of her storylines since have been a series of failed reboots that left the comic’s crowd cold. It’s only been in recent years with the launch of the CBS/CW television show starring the heart-stopping Melissa Benoist that fans have shown enough interest to get DC to try and take the character seriously.

In this latest offering, DC may have found a combination that works by placing Kara on the cosmic side of the DC Universe. There is something oddly satisfying watching a member of the Super gang going toe to toe with the alien factions of the company’s stable of characters. It’s a solid reminder of the other half of the Superman/Supergirl mythos; that these beloved characters are aliens at their core and their abilities might be better suited among the stars.

Have you seen this:
Robin and Batman #2 (Review)

It’s this new type of take on the girl from Krypton that pits her against a Guardian, you know the Guardians right? Those big-headed little guys that boss the Green Lanterns around? You remember them right? Well, not all of the Guardians are good guys and there might be a faction that may have set a series of events in motion that lead to the destruction of Krypton. Oops!

Andreyko already has my attention by putting Kara at odds with other DC heroes. Too often Supergirl has been portrayed as goodie-two-shoes, and it’s nice to see Marc writing against that stereotype. Watching Kara take on the Green Lantern Corps also scratches that “what if Superman went rogue?” itch. Not only do we get to see Kara take on the GLC but there is also an appearance of everyone’s favorite super-powered canine; Krypto!

While I’m enjoying the direction that Andreyko has taken Kara, there are some hiccups. This issue presents a sort of “quest” that Kara must embark on if she wants to get to the truth. It involves collecting a number of special stones and blah blah blah… Marc has basically set Kara up for what video game fans call a “fetch quest”. That’s a pointless series of events which involve gathering a number of useless objects to draw out gameplay or in this case plot. It already seems shaky and I’m not sure that fans will have the patience to hang around and to read this if the immediate plot is shaping up to be this flimsy.

Have you seen this:
Not All Robots #4 (REVIEW)

As far as the rest of the issue Maguire gives us his usual brand of excellent art, but there was one thing I noted; there was a lack of backgrounds in this issue, so I’m not sure if the artist was rushed for time, or if there was just too much action for the page and Maguire wanted the reader to focus elsewhere. It’s not a major distraction but one that I noticed during the first part of the comic.

Otherwise, I’m interested in seeing where this all leads.

A comic about Supergirl in space?