The characterization of Kara Zor-El/Danvers by Mariko Tamaki brought to life with the wonderful art of Joëlle Jones is positively mesmerizing. The world that has been created for ‘Being Super’ encompassing Kara in such a way that in three issues, there has been such a poignant transcendence of the core of this incredible character that I am simply in awe. Tamaki has truly found the perfect face of Kara, she delivers this beautiful dichotomy, that all of the problems one could face as an alien, or as a superhero, the isolation, the fear, the angst, the itching sensation that everyone around you can peer straight through your thinly layered facade and see every truth you’ve been hiding, are 100% mirrored in the reality faced by a teenager. It is a true testament to Tamaki’s and Jones’ talent, their ability to take things that are absolutely 100% ordinary, a montage of two friends going through their high school classes, enduring the continual talk of the students around them, voicing their opinions and hearsay surrounding the death of their friend, and turn it into a product that is so innately captivating that it is devoured on an equal level of intensity as the panels filled with action and incredibly exciting plot twists.

The incredible art from Jones takes the already wonderful story delivered by Tamaki to another level. The way she manages to capture expression and emotion in her pencils is something in a league of its own. She truly enables the reader to emote along with the characters, driving home the smart, and often times, emotionally powerful writing of Tamaki. You can feel yourself actually transported into the scene, the same way a well crafted movie or television show draws the audience into a supporting role. If this dream team were any more 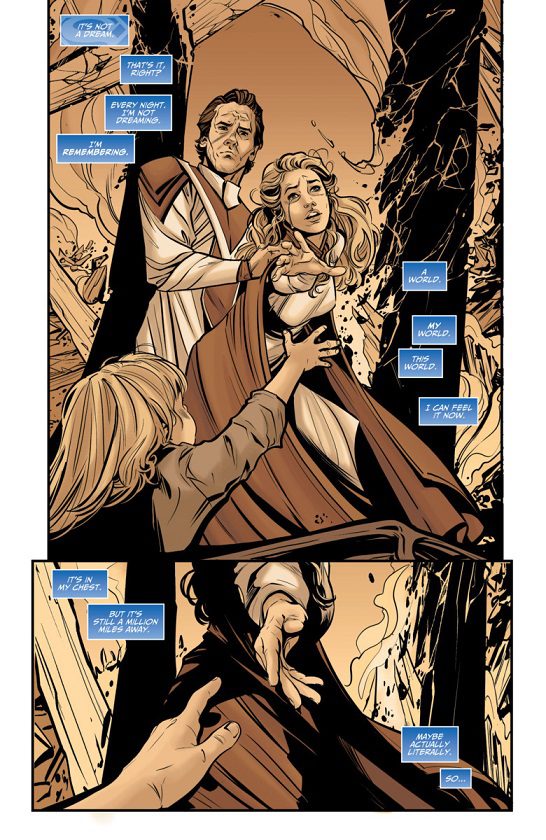 talented I swear you would be able to hear or smell things going on in the scenes as well. It is such a joy to emerge yourself in these pages, not only are Tamaki and Jones absolute experts in their crafts, but the subject material is handled in such an appreciating, thoughtful way. Its not simply re-telling the same old story, or following the cookie cutter recipe for a superhero journey, every subtle nuance is carefully thought out and masterfully executed.

The most powerful scene, one of the most beautifully delivered elements of this story, which is saying a lot because every aspect we’re given is off the charts, is the amazing friendship shared between Kara and Dolly. Further intensifying their bond is the loss of their friend. The text conversations, the traveling through the halls of their school, the energy captured by these two is executed so beautifully, it brings such a real life feel to this book. Their connection truly expands the depth of how powerful this book is. Taking the additional time to ensure that the friendship Kara and Dolly share is quirky, almost giving them their own language at times, the conversations range from utterly random nonsense to deep and emotionally heavy, the subtlety in the expressions delivered by Jones’ tremendous art, and the heart string tugging internal dialogue Kara carries on, all coincides to develop one of the best friendship iterations I’ve seen in a book, comic or otherwise, in an incredibly long time. Its multi-layered, its effortless, its real.

It’s Hammered home when Kara and Dolly skip gym to get away, and during the course of their conversation Dolly addresses the elephant in the room ‘You know that I know right?’ ‘You’re different, you can do things’ Kara brushes it off, delivering rehearsed responses, while her internal dialogue reveals that she’s been trained by her parents to hide it, to protect herself, to protect her 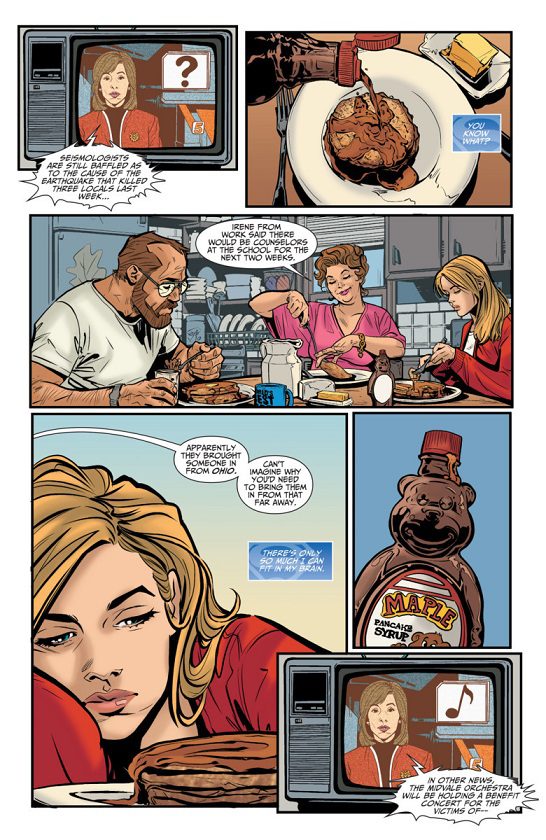 family, to protect those she cares about, showing the conflict and regret Kara has, dying to open up to her friend. You can begin to see the crack in Kara’s shell built around her true identity when her best friend ends the conversation with ‘I don’t give a crap if you’re different, or whatever.’ Its such a real conversation, so expertly written with the simultaneous conversation between Kara and Dolly and Kara’s thoughts, and the ability to convey so much emotion in a drawn medium is positively exceptional.

One of the most captivating, engrossing comic arcs that I have had the sincere pleasure to read, fills this edition with so many exciting revelations and ends on a note that contains so many possibilities that I’m already dying to pick up issue 4! The excitement of what else the dream team of Tamaki and Jones have up their sleeves for the remainder of this arc is almost too much to handle. I’ve always been a Supergirl fan, but this iteration has by and large been one of my favorite, not only Kara Zor-El stories, but one of the most powerfully written and beautifully illustrated books I have read period.

Our hero has set their self on a course with endless possibilities, countless dangers, and so many questions left to be answered. What adventures are left in store for Kara Zor-El/Danvers?  We cannot find out soon enough, so until next time, #keepitnerdy.

Being Super Kara Danvers Kara Zor-El Krypton Kryptonian Supergirl
Are you an Insider?News, reviews, & updates are just the beginning.