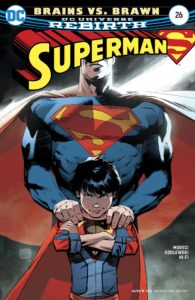 The battle with Manchester Black is over, but Superman is still battling to get Jonathan to listen to him. As Jon is becoming more comfortable with his powers, he’s also becoming more headstrong. To get Jon to humble himself and listen better, Superman decides to teach Jon the way Pa Kent taught Clark when he was young: letting him make his own mistakes.

Superman #26 could definitely be classified as a “filler” issue, but it’s also a very necessary issue. Michael Moreci wrote this issue in place of the usual Patrick Gleason and Peter J. Tomasi, and he did a great job picking up an important theme that surfaced in the last story arc. There has been tension between Jon and Clark that started before Manchester Black appeared; and while it could have been easy to disregard, that would have done both characters a disservice. By acknowledging that tension and showing how they work through it together, some key character development happens. Clark is a loving parent who is struggling with his child’s obstinateness. Jon is a pre-teen who wants to prove he’s capable and independent. Those simple qualities make for a relatable and compelling father/son story.

Aside from the tense father-son relationship, we finally get to see Superboy using his new powers! Throughout the issue, we get to see Superman Superboy work side by side to save people from burning buildings, stop runaway trains, and beat up some C-list villains together; and it’s awesome.

Scott Godlewski provides art for the issue, and while it’s uneven in some panels, it’s good overall. I was thrown off by the notable difference in the way faces are drawn from page to page, and there are some panels where the faces seem disproportionate. But the action panels look great, and I appreciated the similarities between young Clark and Jonathan.

While Superman #26 is a filler issue, it tells a necessary father/son story that is sure to strengthen Jonathan and Clark’s relationship moving forward.