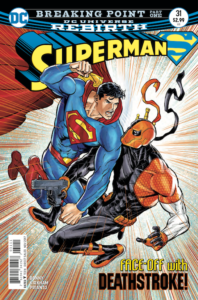 Superman has been away from the main story arc for quite some time, with issue #31 being the start of the third two-parter in a row. At this point, I’m missing a good six-issue arc from this book. However, I’m still having fun. “Fear Itself” was better than “Road Trip” and now that Deathstroke has entered the book, let’s see if “Breaking Point” Part 1 can be even better…

Superman takes a back seat for most of the issue and the story focuses on Lois Lane this time. It’s a departure from the norm that you didn’t know you wanted as we can focus on Lois’ journalism skills and what lengths she will go to to get a great story written. I love her inner monologues that provide insight as to what goes through her head in the process of getting that story and what she thinks when she’s in danger. As Lois is asking around for Deathstroke’s whereabouts, she gets into a fight with Cestus and his goons who are looking for Deathstroke as well and it’s here we get into her character deeper. 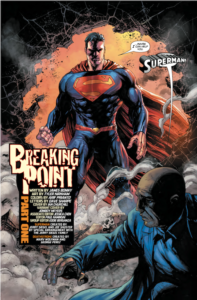 howing how strong of a character Lois is as much as this issue has. She’s scared, sure, but she doesn’t freak out and let the situation get out of her control. She uses a stun device Clark gives her earlier in the issue and only then is when Superman comes into get her out of the pinch. What’s revealed here is that he isn’t just hovering over her as she’s trying to track down Deathstroke, the stun device sets off a beacon that only he can hear that tells him she’s in danger. Lois is actually is mad at first because she is working and knows she can handle the situation but she realizes he wasn’t hovering over her; he actually trusts her. This is proven more so after she gets into more danger and he doesn’t save her. I find this as a deep dive into showing how their relationship works and how they trust each other in their respected fields as equals, as adults. They aren’t constantly worrying about each other when they’re in dangerous situations. When there is something to worry about, that’s when they start to worry. They let each other do their own thing and I love that. Their relationship is so strong and their actions to this situation tells it all.

The issue comes to a point where it’s at it’s greatest- Lois’ interview with Deathstroke. It is brief but he reveals to her a sufficient amount of characteristics about himself to give a good overview of himself to the general public, but also an introduction to new readers or someone new to the character. His brutal fighting style and the types of kills he conducts showcase his character very well and it makes me want to read his book since I’m not already. The character interactions throughout this issue is what makes it shine with amazing art to top it off. Kirkman’s art is beautiful, especially his Superman and Deathstroke designs- not to mention how beautiful he makes Lois as well.

Superman #31 is a fantastic issue. The book has been on a 2-part arc streak for a while but this arc, if this issue alone is anything to go by, is easily the greatest. The character interactions are fun and deep with art that makes the issue worthwhile. Superman and Deathstroke don’t fight in this issue but I’m excited to see that in #32.