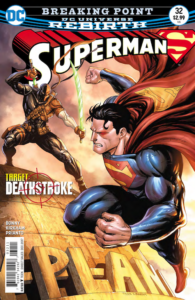 The final issue of the string of 2-issue arcs is finally here with Superman #32. Is it a great end to the string and was it worth the time? Is this a good finale to the Superman vs Deathstroke fight? Let’s find out as we dive into “Breaking Point” Part 2…

Deathstroke tests Superman’s limits to try and break him and to see how far he’ll go to save the one’s he loves. The long battle that ensues proves to Slade that Superman will never be broken enough to take a life. At first, I was confused as to why all of a sudden Slade would want to do this just one issue later. Turns out that it was Amanda Waller who hired him to test Superman in this way. It’s a genius way to get them to fight like this because, without the events that brought them together in these issues, Superman and Deathstroke wouldn’t normally cross paths.

Superman and Batman have had a synergy this week in that they explore themes of being pushed to the breaking point. Superman never got to the point that Batman did (see Batman #32) and it’s absolutely within character. Clark is a sharp thinker and tries not to act with emotion, he acts with logic. There are countless times that he could have snapped Deathstroke neck but his moral code trumps all. Slade even sees this in Supes’ eye, he never had the murderous look, one he knows all too well. 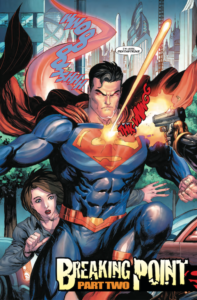 Faster than a speeding bullet, Superman is a true boy scout, a man in blue. He knows from right and wrong and true justice. This issue makes that even more concrete to us and the villains. This ruse that Waller set up is very interesting because she did it just in case she needed to do some pushing herself. It has me curious as to what could come of this, what does she intend to do, and does this have anything to do with Task Force X? Only time will tell but my guess is she needs to see what Superman’s limits are to possibly boost the Suicide Squad as a team by possibly updating it with stronger beings.

The art in this issue is gorgeous, something I don’t expect any less from Kirkman. His Superman characters look so good but his Deathstroke isamazing. The way he’s drawn makes him an intimidating bad ass, someone you definitely don’t want to run into. Deathstroke as a character already brings that but Kirkman’s art tops it off and solidifies him as the definitive Deathstroke artist.