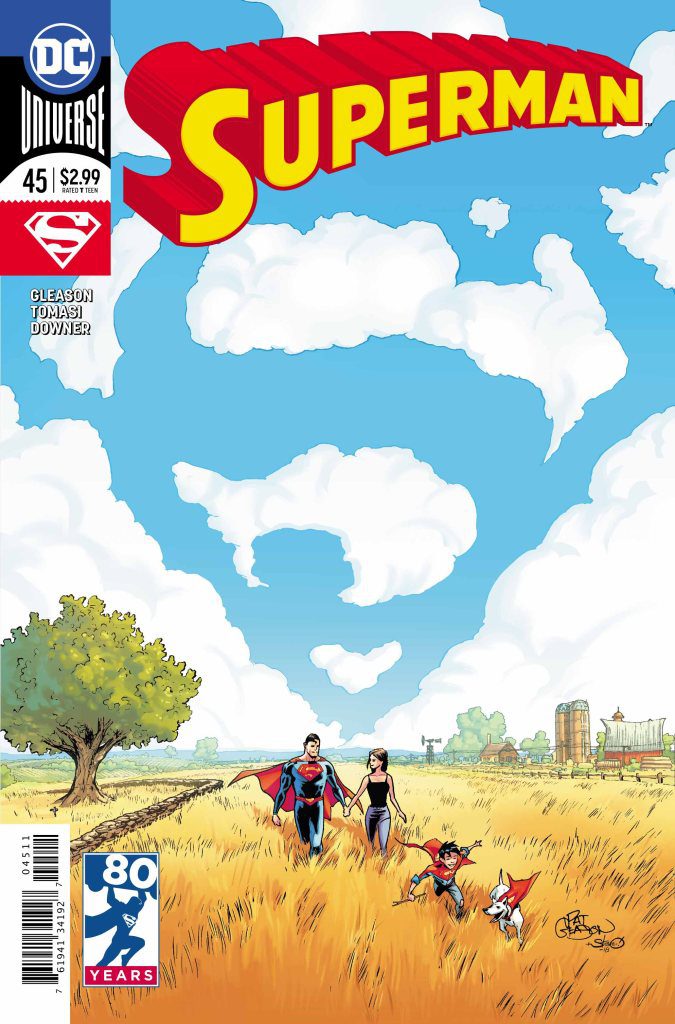 This is a big week for Superman, his family and supporting cast. Attention is focused on the milestone 1000th issue of Action Comics, the oversized anniversary issue, and the arrival of Brian Micheal Bendis. While the celebration around 80 years of Superman is represented well in the anthology that is Action Comics #1000, Superman #45 deserves praise for being a tightly focused, emotional story about Superman and his family. Writers Patrick Gleason and Peter J. Tomasi close out the Kents time in Hamilton with a heartfelt issue that beautifully captures the core of this title since DC’s Rebirth.

Gleason and Tomasi craft a quiet moment in the Kent’s life as they move out of their country house and complete the transition to Metropolis. Hamilton County was not always a quiet country life and over the first 40 or so issues saw plenty of action and adventure. The second half of this issue gently alludes to many of these story arcs but never becomes the comic equivalent of a clip show. The heart of this issue and Gleason and Tomasi’s run on this series is the Kent family. The quiet father and son moments carry emotional weight and will resonate with readers who’ve questioned or struggled with life changes. Clark and Jon’s dialog is realistically written and reflects similar parent/child explanations where parents struggle to rationalize life changes. Lois’ silent mopping of footprints from their growing child, reflects a feeling of pride and sadness that any parent can relate to.

The Kents started their life in Hamilton County in hiding before the end of the New 52. At that time there were two Supermen and two Lois Lanes. A lot has happened in the mythos of Superman since then, but their family bond has rooted these three characters through each new story arc. Gleason and Tomasi’s wrap up in this issue never becomes melodramatic, nor does it feel preachy. They created many tender, personal moments for the Kents during their run and this issue is an excellent capstone on those family dynamics.

While the writing remains a high point throughout the issue, the artwork takes a turn during the second half of the issue. The art and colors are still credited to Gleason and Stephen Downer, but the detail of faces shifts and creates a lack of consistency in the design. The Lois in the first few pages looks different than the Lois of the final few pages. There may be artistic choices here to mask identities, but the resulting artistic inconsistency takes away from an otherwise perfect issue.

Action Comics #1000 may celebrate Superman as an iconic figure, but Superman #45 celebrates Superman as a father. Gleason and Tomasi’s celebration of the Kent family carries emotion that rivals the oversized weight of other releases this week.